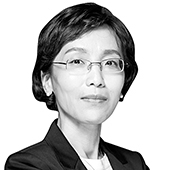 Ha Hyun-ock
The author is head of the economic policy team at the JoongAng Ilbo.


“I observed that in all the discussions that preceded the enslavement of medicine, men [from the government] discussed everything — except the desires of the doctors. Men considered only the ‘welfare’ of the patients, with no thought for those who were to provide it. That a doctor should have any right, desire or choice in the matter, was regarded as irrelevant selfishness; his is not to choose, they said, but ‘to serve.’”

The comment was not made by resident physicians who have entered a strike from last week in protest of a government plan to increase medical students and establish a public medical school. Actually, that’s a part of a speech from Dr. Hendricks, a fictional figure in the 1957 novel “Atlas Shrugged” by Ayn Rand — a book that is said to have sold the most copies in the United States after the Bible. He is amongst a number of people from diverse professions — doctors, philosophers, musicians, artists, scientists, inventors, businessmen and financiers — who went into hiding in a mountain valley by fleeing from statism and government coercion over individuals.

The novel is based in a dystopian United States referred to as the “People’s States.” Under outsized government intervention, regulations and forced surrender of hard-earned wealth, inventions and creations, scientists, inventors and artists as well as businessmen disappear into the valley of capitalist.

The fictional setting of 1957 book strangely overlaps with South Korea of today. Sitting with resident physicians in a meeting aimed at preventing a general strike of medical professionals, government officials scolded them for “going into a strike at such a critical time.” They reminded doctors that they were “public properties.”

Instead of hearing out why doctors had to resort to a strike and the grounds for their opposition to expansion in medical training, government officials must have emphasized the Hippocrates Oath on doctors’ role and duty in society. But even when taking into account of their higher moral duties, regarding individual physicians as a part of “public property” is going too far. The government was stigmatizing doctors as a “selfish” group who does not care for patients even as the Covid-19 pandemic has reached a new peak.

The strike of doctors can look like a selfish action to defend their vested interest. But it is bewildering to think why the government has to rush with a plan to establish a “public medical school” by 2024. It is railroading with the plan without thorough examination on the social and economic factors behind the gap in medical care and discussion on the reward system for the efficient management of medical resources.

Few would disagree to the need of supplying more balanced healthcare through stronger public medicine. But a good cause does not always secure good results. Having more doctors won’t likely ease the gap in medical care. Without ensuring economies of scale or an appropriate compensation system, doctors won’t be motivated to serve in rural areas.

The case with the nursing community can offer lessons. After the quota for nursing schools increased sharply to address a shortage of nursing staff, the number of licensed nurses reached 394,662. But only half of them are in the field. Nurses chose not to practice their permits due to poor pay despite their hard work.

Resident and professional doctors have taken collective action. The government suggested that doctors withhold the plan during a battle with the coronavirus — and at the same time the government mulls a strong punitive action such as forced return or license revocation. Regardless of the cause, doctors are asked to “consecrate” their lives for public service.

The Seoul government is becoming a copycat of the omnipotent state depicted in “Atlas Shrugged” in terms of its meddling and coercion over real estate and medical community. “We want (laws) to be broken … There’s no way to rule innocent men. The only power any government has is the power to crack down on criminals … If there aren’t enough criminals, one makes them. One declares so many things to be a crime that it becomes impossible for men to live without breaking law.”