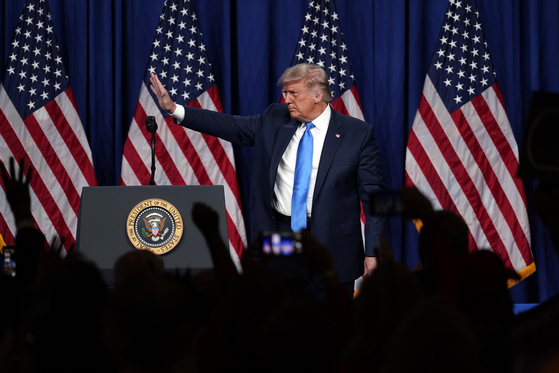 
U.S. President Donald Trump on Monday reiterated his role in making the Korea-U.S. FTA a fair deal for his country, claiming the bilateral free trade pact had created jobs only for Korea before it was renegotiated and amended under his leadership.

“We fixed a horrible deal that was made with South Korea, remember? It was a Hillary Clinton special. She said this will produce 250,000 jobs, and she was right, except unfortunately the jobs went to South Korea, not to us," Trump said while marking a surprise visit to a meeting of the Republican National Convention Committee in Charlotte, North Carolina, which unanimously nominated Trump as U.S. president.

The committee meeting came hours before the Republican Party was set to kick-start its four-day national convention, with Trump expected to formally accept his presidential nomination on Thursday.

The Korea-U.S. FTA, initially implemented early 2012, was renegotiated in 2018 at a request from the Trump administration.

Under the revised deal, implemented at the start of last year, Seoul agreed to double the number of U.S. vehicles entering its market each year that do not have to comply with its local industry regulation to 50,000, while also allowing Washington to hold on to its 25 percent import tariffs on Korean-made pickup trucks for another 20 years until 2041.

Trump earlier said the deal is now "a really great deal for us."

In 2019, Korea's exports to the United States gained 0.9 percent from a year earlier to $73.3 billion, slowing from a 6 percent on-year increase the year before.

However, the rise in the United States' shipments to Korea also slowed to 5.1 percent last year from a 16 percent spike the previous year, according to data from the Korea International Trade Association.