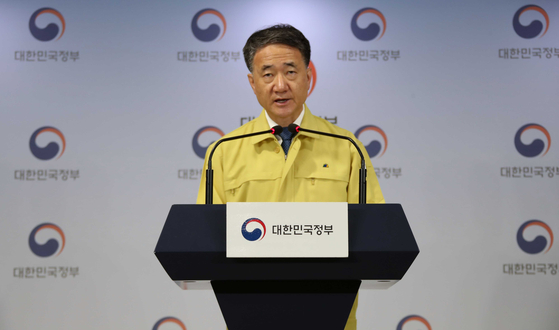 
The Korean government on Wednesday ordered doctors on a nationwide strike to return to work, saying they must maintain their posts as the number of coronavirus cases trend upward.

President Moon Jae-in broke his silence and called on authorities to respond firmly to the strike through “principled law enforcement” and ensure there is no vacuum in the country's emergency medical care system, the Blue House said.

These hardline responses from the government came after members of the Korean Medical Association (KMA) went on a coordinated 72-hour strike across the country, threatening to paralyze hospitals and emergency care systems amid a mushrooming Covid-19 outbreak.

Last week, many of the country’s medical interns and fourth-year residents walked off their jobs as part of an indefinite strike. This forced general hospitals across the country to cut back on surgeries.

According to the Seoul metropolitan government, 506 small-sized doctor’s offices across the city — around 5.8 percent of all 8,756 registered — closed their doors Wednesday in solidarity with the strike.

The uproar centers around four policies in the government’s health care reform package: an increase in medical school admission quotas, establishment of a public medical school, extension of national health insurance coverage to Korean traditional medicine and the expansion of remote medical services.

Last-minute negotiations between the Ministry of Health and Human Services and the KMA collapsed Tuesday, prompting the latter to announce it had “no choice” but to go on strike to make its voice heard. The KMA claims 130,000 members, though the actual number participating in the strike is believed to be fewer than this.

“We tried our best to negotiate to prevent a collective strike by the doctors’ associations amid the serious possibility of a mass contagion of Covid-19, but the KMA and the Korean Intern Resident Association rejected the government’s compromise and went through with the strike,” Park said at an emergency press briefing Wednesday.

“Now the government has no choice but to issue a commencement-of-business order and other necessary legal measures for the sake of protecting the people’s lives and safety.”

Park went on to warn that any violations of the order could be punished with a jail sentence of up to three years, or a fine of up to 30 million won ($25,000) and medical license revocation.

The measure will be expanded to apply to areas outside of the capital and Gyeonggi, as well as to smaller individual medical facilities.

The minister also announced the government will be carrying out the national medical-licensing examinations without any changes.

Around 2,800 medical students — 92.9 percent of all test takers — have so far announced they will boycott the test — given in September and October — to protest the quota expansion.

“We will ask each individual again whether they will be taking the test, and if they verify an unwillingness, we will cancel their testing right,” Park said.

Prime Minister Chung Sye-kyun in a government meeting Wednesday also urged doctors undertaking the strike to return to their practices, warning that “strict punishment” will be doled out to any violators of the return-to-work order.

The government has gone after the doctors with such focus in part because the public has been unsympathetic to the cause as Covid-19 case numbers increase again.