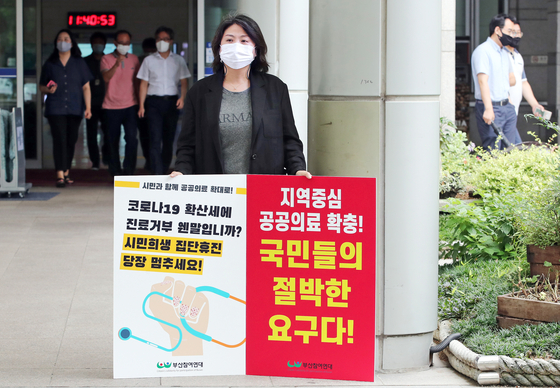 A member of the civic group Citizens' Solidarity for Participation of Busan holds a one-person picket protest in front of Busan City Hall, showing support for expanding regional health care services and urging doctors to halt their strike and return to treating patients amid the Covid-19 pandemic. [SONG BONG-GEUN]


As the ruling Democratic Party (DP) signaled a willingness to head back to the drawing board with its medical reform plans, anticipation is growing that the government and doctors may finally reach a compromise to end the ongoing trainee doctors’ strike.

Han, who also is chair of the National Assembly’s Health and Welfare Committee, told reporters after the meetings that she conveyed to the KMA that the DP is willing to restart discussions on medical reform plans from “a square-zero state.”

She added that medical reform issues, such as regional imbalance and the expansion of public medical services, could be discussed with an “open posture” through a special commission or a consultative body.

The Ministry of Health and Welfare on Wednesday likewise said it is willing to respect any agreement reached between the National Assembly and the medical community as doctors urged the scrapping of four governmental medical reform plans.

“We look forward to an amicable outcome as the National Assembly and doctors’ groups continue their discussions,” Sohn Young-rae, a Health Ministry spokesman, said in a briefing.

He added the government would “respect a thorough agreement” reached by the two sides.

The Health Ministry earlier said the government has already unconditionally suspended plans to expand admissions to medical schools for the time being.

The spokesman’s remarks indicate that the government is willing to follow any decision reached by the National Assembly, expected to help resolve the ongoing standoff between the government and medical community. The impasse resulted in a strike of trainees beginning Aug. 21, while young doctors have tendered their resignations en masse.

KMA President Choi Dae-zip told the JoongAng Ilbo over the phone Wednesday that Rep. Han had said “discussions can start from square zero, which can be equated to a review from the status quo.”

He added, “The medical community likewise is not unconditionally fighting, but rather urging that our requests be sufficiently reflected.”

The doctors’ associations have protested four reform plans proposed by the government and DP in July: increasing the medical school admissions quota by 4,000 in the next decade; the establishment of a public medical school; the extension of national health insurance coverage to Korean traditional medicine; and the expansion of remote medical services.

The KMA organized two general strikes in August and has plans for a third doctors’ walkout starting Sept. 7.

“Trainee doctors should trust the promises made by the government, National Assembly and seniors in the medical community and return to their patients' sides immediately," Prime Minister Chung Sye-kyun said Wednesday.

The government has been running a support center for those impacted by the doctors’ strike since Monday, and the Health Ministry said it received 47 complaints that day and 57 calls Tuesday.

On Tuesday, 77.8 percent of trainee doctors took part in the walkout, a slight drop from 83.9 percent on Monday.

The Health Ministry said that the hospitals employing the four trainee doctors had sent supplementary documents confirming that they had been on leave.

President Moon Jae-in in a statement Wednesday expressed his deep gratitude to nurses for their “dedication and efforts to silently guard the medical scene” and recognized that they have been “shouldering the burden of the doctors” who went on strike amid the coronavirus pandemic. 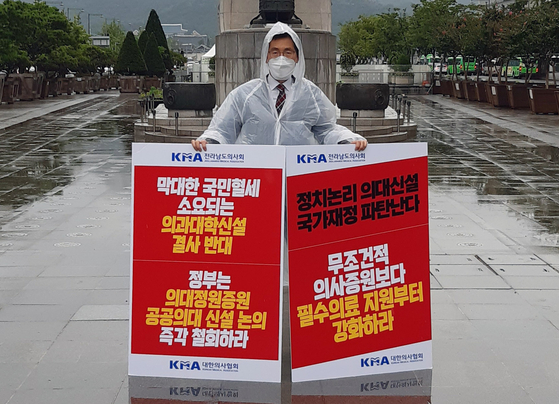