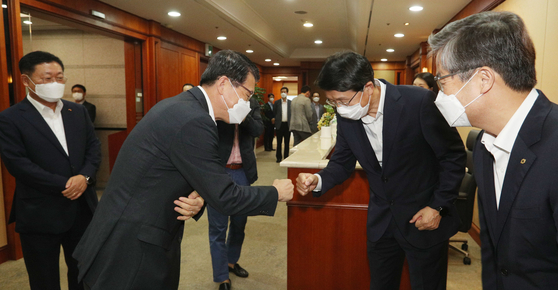 
The Financial Services Commission (FSC) on Thursday said it has decided to extend a ban on short selling for another six months.

The FSC said the decision was based on growing concerns over  possible market volatility due to the resurgence of Covid-19.

The FSC said it was planning to decide on whether to extend the ban on Sept. 9 after holding a public hearing.

Lifting the ban on the short selling could affect the sentiments of retail investors, which have been the driving force behind a rally on the local stock market.

“Retail investors, with record-breaking net purchases, have been holding up our stock market,” said FSC Chairman Eun Sung-soo in a meeting with heads of brokerage firms on Thursday. “The temporary ban on short selling is believed to have contributed to stabilizing the investment sentiments of retail investors.”

On Thursday, the market closed 24.87 points lower than the previous day, a decline of 1.05 percent, ending a four-consecutive-trading-day rally. The decline was cushioned by net buying by retail investors. Foreign and institutional investors net sold  shares.

The FSC estimated that between March and Aug. 21, retail investors have bought 37.1 trillion won worth of stock while foreign investors net sold 23.4 trillion won, and institutional investors dumped 12.9 trillion won.

Short selling is a trading maneuver in which investors borrow shares and immediately sell them, hoping they can be repurchased at a lower price when the market drops.

The government banned short selling in March for the first time in three years, as the market dropped sharply when the number of confirmed cases of the coronavirus spiked in Daegu.

“We are cautious about spurring retail investors to sell short considering several problems regarding [recent] private equity funds,” Eun said. “[However,] from the perspective of expanding opportunities [for retail investors], we plan on looking into improvement measures.”