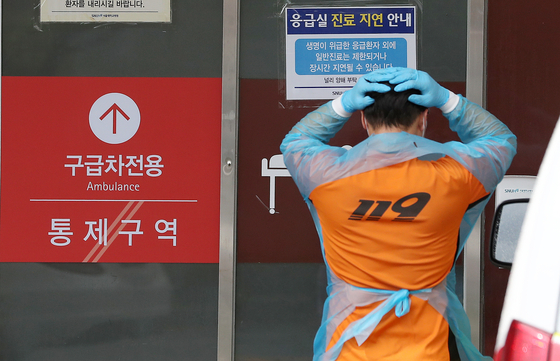 A sign is posted at the entrance to the emergency room of Seoul National University Hospital in central Seoul saying delays were to be expected. Trainee doctors at this hospital and many other major medical centers nationwide are on an indefinite strike to protest the government's plan to increase medical school admissions. [NEWS1]


Hundreds of doctors in training remained on strike despite the Health Ministry’s threat to take criminal action against them.

According to Yoon Tae-ho, a senior official at the Health Ministry, the government has issued orders to 358 medical interns and fourth-year residents who walked off their jobs last Friday to return to emergency rooms and ICUs in 20 hospitals in Seoul and Gyeonggi.

On-site inspections were being conducted at major hospitals to verify whether trainee doctors complied with the order, Yoon said, adding that violators of the order could be punished with a jail sentence of up to three years, or a fine of up to 30 million won ($25,000) and medical license revocation.

Members of the Korean Medical Association (KMA) on Wednesday launched a coordinated 72-hour strike in solidarity with the trainee doctors to protest four policies in the government’s health care reform package.

The most contentious of the policies are an increase in medical school admissions and the establishment of a public medical school, which the Korean Intern Resident Association (KIRA), the organization responsible for the strike, claims will distort the medical industry by encouraging new doctors to specialize in profitable non-essential services like plastic surgery.

The government argues an increase in the number of doctors is necessary to meet health care demands in rural areas, where the elderly population is rapidly growing. The density of physicians per 1000 people in Korea stands at 2.4 currently, significantly lower than the Organisation for Economic Cooperation and Development (OECD) average of 3.5.

The Health Ministry's announcement last month that it planned to increase the number of medical school admissions by 400 annually to a maximum of 4,000 in the next decade prompted fierce resistance from both KIRA and the KMA that culminated in their decision to launch coordinate strikes — all amid a new surge in Covid-19 cases in the greater Seoul area.

Warnings by the government that it would take legal action if trainees did not return to their posts apparently did little to dissuade them, with KIRA claiming Thursday that 76 percent of all 16,000 interns and fourth-year residents have prepared resignation letters as objections to the policies.

It is not known how many of these letters have actually been filed, however. Several major hospitals in the capital, like Seoul National University Hospital, Seoul St. Mary’s Hospital and Konkuk University Medical Center said they had not yet received any resignations as of Thursday morning.

Among fully-licensed doctors, the actual number partaking in this week’s general strike appeared to be lower than what the KMA had avowed in its earlier warnings to the government, at around only 10 percent.

Though it has a membership of over 100,000 — largely because all physicians in Korea are automatically registered with the organization once they receive their licenses — the KMA has been criticized for being unrepresentative of the larger medical profession, and subject to the whims of a minority of its more active members who have enough time to devote to its activities.

Its current leader, Choi Dae-zip, is a confirmed right-wing activist known for political activities unrelated to medicine, such as calling for the release of former President Park Geun-hye from prison.

Choi on Thursday sent an open letter to KMA members across the country asking for their solidarity with the strike.

Part of what may be dissuading greater participation is a growing public backlash against the strike, as it coincides with what is increasingly looking like another mass Covid-19 contagion in the country.

A poll released by Realmeter on Thursday, conducted among 500 respondents nationwide, showed that 51 percent agreed with the government’s back-to-work order to trainee doctors, as opposed to 42 percent who said it was a “unilateral decision.” The survey had a confidence level of 95 percent and a margin of error of 4.4 percentage points.