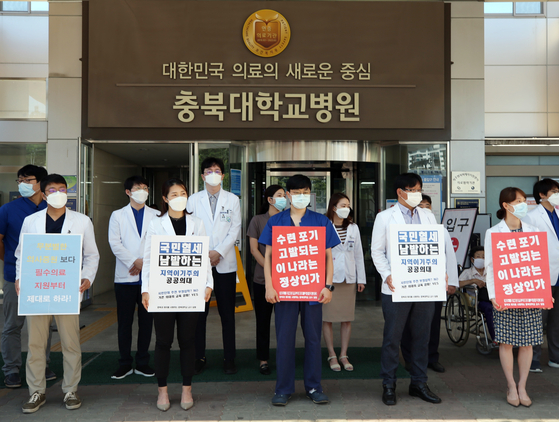 
The government stressed Tuesday that it already unconditionally suspended plans to expand the medical school admissions in an attempt to coax striking trainee doctors to return to their jobs.

“The government already unconditionally halted forwarding policies on expanding the medical school admissions quota to the Education Ministry” until after the Covid-19 crisis passes, Yoon Tae-ho, a senior Health Ministry official, said in a briefing.

His remarks come as the government is urging young doctors to end their ongoing walkout after the Korean Intern and Resident Association (KIRA) kicked off an indefinite strike on Aug. 21.

The walkout has been joined by fellows and is supported by the Korean Medical Association (KMA) that has forecast another general doctors’ strike for next week.

Some 83.9 percent of trainee doctors have taken part in the strike as of Monday and 32.6 percent of fellows, according to government figures. An extended walkout could seriously strain hospitals, the government argues, especially amid the ongoing coronavirus pandemic.

Young doctors launched an emergency response committee representing interns, residents and fellows Tuesday to collectively oppose a series of four medical reform plans being pushed by the government in an effort to improve health care coverage in rural areas.

The leaders held a press conference at the Seoul Medical Association in Yeongdeungpo District, western Seoul and promised to return to their jobs if the government scraps its reform measures and starts medical reform discussions from status quo.

Park Ji-hyun, the president of KIRA and head of the committee, called on the government to “halt its abuse of authority” for such a dialogue to proceed.

The doctors’ associations have opposed a set of four government reform plans announced in July: an increase in medical school admission quotas to increase rural health care coverage; establishment of a public medical school; the extension of national health insurance coverage to Korean traditional medicine; and the expansion of remote medical services.

Doctors argue that the problem is not a shortage of hands. Rather than increasing the number of medical students by 4,000 in the next decade, they argue that what is needed is a more fundamental overhaul of the current medical workforce infrastructure, and a need to address the underlying issues driving poor coverage in rural areas.

“The government doesn’t want to see a single doctor punished," said Prime Minister Chung Sye-kyun in a press conference Tuesday. “It is the intent of the government to resolve the current issues through dialogue.”

Chung said postponing the national medical license exam, which had been boycotted by medical students, was an example of the government’s flexibility and its willingness to work with the medical community.

The government on Monday postponed the Korean Medical License Examination set for September and October by one week, a move which has led to speculation of a possible compromise between the two sides.

However, there isn’t much time as the KMA, which represents some 130,000 doctors, plans an indefinite strike starting Sept. 7. It has so far refrained from joining two rounds of general strikes in August.

Last Friday, the government filed a police complaint against 10 striking young doctors who violated government orders to return to their jobs, a move strongly opposed by the medical community.

Surgeons at the Catholic University of Korea Seoul St. Mary's Hospital decided Monday not to accept outpatients or perform operations on Sept. 7 to coincide with the third doctors’ general strike. A group of 23 surgery professors took part in a meeting to reach the decision. The doctors issued a statement opposing the government’s medical reform plans.

A group of 11 doctors at the National Forensic Psychiatry Hospital, under the Justice Ministry, also tendered resignations Tuesday in protest of the government's medical reform plan and in support of trainees.

Young doctors, meanwhile, are not showing any signs of relenting.

All 181 trainee doctors at Chungbuk National University Hospital in Cheongju, North Chungcheong, tendered their resignations Tuesday, along with 27 fellows of 227, according to the hospital.

Likewise, all 118 trainee doctors at Wonkwang University Hospital in North Jeolla have also handed in their resignations and are participating in the walkout.