Huge 2021 budget has a bit of something for everyone

Huge 2021 budget has a bit of something for everyone 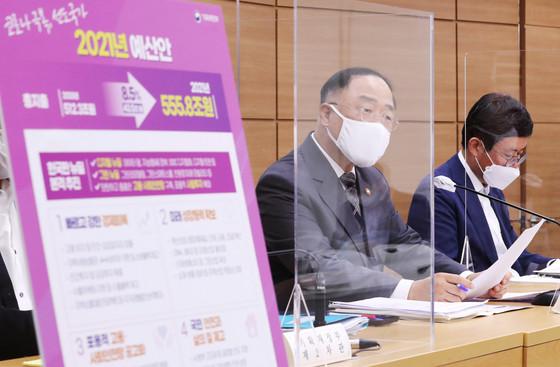 Finance Minister Hong Nam-ki holds a press briefing on the 2021 budget at the government complex in Sejong on Aug. 27. The Ministry of Finance allocated additional funds for the implementation of a mobile ID system in next year's budget finalized Tuesday. [YONHAP]


A mobile ID system, studios for K-pop virtual concerts and the burying of power cables are some of the projects that are set to be funded by Korea's record 2021 budget.

“Untact” and digital projects will be receiving significant support.

A total of 2.24 billion won ($1.89 million) has been budgeted for mobile IDs. Users will be able to download an identification app from a government website without a separate certification process. The service is scheduled to be made available at the end of 2021.

When the service rolls out, the public will be able to buy items that require identification, such as cigarettes and alcohol, with their mobile IDs, or rationed items like protective masks.

A mobile police report system is also in the works. When it is in operation, a citizen will be able to send video to the police, which would receive real-time location information along with the multimedia evidence. A total of 780 million won is allocated for the project.

Safety measures for children will be funded by the budget. This includes a project for burying electric wires underground in areas frequently crowded with children, like schools. The project will start next year and is expected to be completed in 2025. The estimated cost is 2 trillion won, and the government is providing a fifth of the funding.

To prevent traffic accidents, a green zone that separates the sidewalk and traffic lanes will be built under the Green New Deal initiative. Fifty greenbelt regions will be added in 2021 and 370 by 2025.

Regulations will be tightened so that day care centers will be able to better track the source of food-poisoning outbreaks. In line with the strengthened regulations, the government is providing 3 billion won to day care centers for the purpose of purchasing fridges and containers.

The provision of transportation vouchers to the severely handicapped is one of the new projects under next year’s budget. Those who cannot earn above minimum wage due to their disability will be prioritized. A total of 3.1 billion won will be allocated for monthly vouchers of 50,000 won for nine months per individual.

How about a new currency design?

JTBC teams up with Next Entertainment World to accelerate global expansion