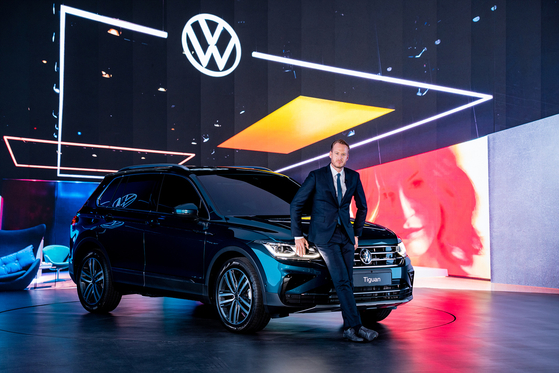 The sticker price on Volkswagen’s flagship Tiguan midsize SUV will be marked down by an average of 2 million ($1,700) won in Korea under the German auto company’s so-called “3A Strategy.”

Volkswagen Korea said it is making its cars more “accessible, affordable and advanced” -- the three As -- because it wants to narrow the sales gap with second biggest imported car brand in Korea, BMW.

Volkswagen is currently No. 4 and its affiliate Audi is No.3.

“We will resolve customers’ concern about the high total cost of ownership of imported cars.”

The midsized Tiguan SUV will be the first model to come under the new strategy. Sales of a partially revamped version of the model began Thursday.

The sticker price of its basic 2.0 TDI Premium trim, which was 43 million won previously, has been reduced to 40.6 million won.

The other two trims – the 2.0 TDI 4Motion Prestige and 2.0 TDI Prestige – will be sold at discounts of 1.9 million won and 1.6 million won respectively.

Volkswagen Korea also improved its warranty program under the 3A Strategy.

For all sales, Volkswagen Korea will offer a five-year or 150,000-kilometer warranty, without additional costs. Before only select models came with such warranties.

Krapp said although electric vehicles (EVs) are bringing a paradigm shift to the auto industry, internal combustion engines will continue to exist for at least the next decade.

The EA288 evo, an upgraded version of Volkswagen's EA288 diesel engine, reduces emissions of nitrogen oxide by 80 percent compared to the previous version and meets the Euro 6 standard, Volkswagen says.

The EA288 evo will be equipped in all internal combustion models sold in Korea in the future, Krapp said.

Volkswagen climbed to the No. 4 spot last year in Korea’s import car market from 11th place in 2019. In the first half of this year, it is maintaining the fourth position with sales of some 8,700 units.

Krapp said Thursday that there were supply problems in the first half of the year due to the semiconductor shortage.

“We are now capable of selling more cars in the next three to four months than what we have sold so far this year,” Krapp said.

Volkswagen Korea plans to import the ID. 4 all-electric SUV in the first half of next year. The ID.4 is Volkswagen’s first pure electric model to be made on the German carmaker’s EV-dedicated MEB platform.