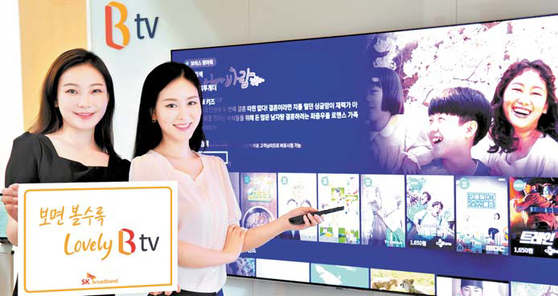 
The row over content licensing fees continues as cable television operators refuse studio demands to pay more for shows in an already competitive television market struggling to cope with the arrival of subscription-based streaming services.

Traditionally, cable TV operators had the upper hand as the provider of content platforms, but with the rise of services like Netflix, studios are in an increasingly strong bargaining position. This shift has upset the old relationship between content providers and platforms.

After a months-long conflict, cable TV operator D’Live and content provider CJ ENM failed to reach a compromise on licensing fees on Monday. Both sides said they would continue to negotiate until the government comes up with a mediated settlement.

The dispute started in March when CJ ENM, owner of 13 channels including tvN and OCN, requested a 20 percent hike in license fees for providing its channels to D’Live, one of the top players in the cable TV market. As D’Live continued to refuse the increase, CJ ENM said it would stop transmission of its 13 channels.

The two failed to reach an agreement by the Aug. 31 deadline proposed by the Ministry of Science and ICT. As a result, the ministry on Tuesday said it would step in to mediate between the two and come up with a settlement by the end of September.

“Cable TV subscribers are continuing to shrink and so are sales. Content usage fees, on the other hand, are increasing,” said a spokesperson for D’Live, explaining why higher license fees aren’t an option for the company. 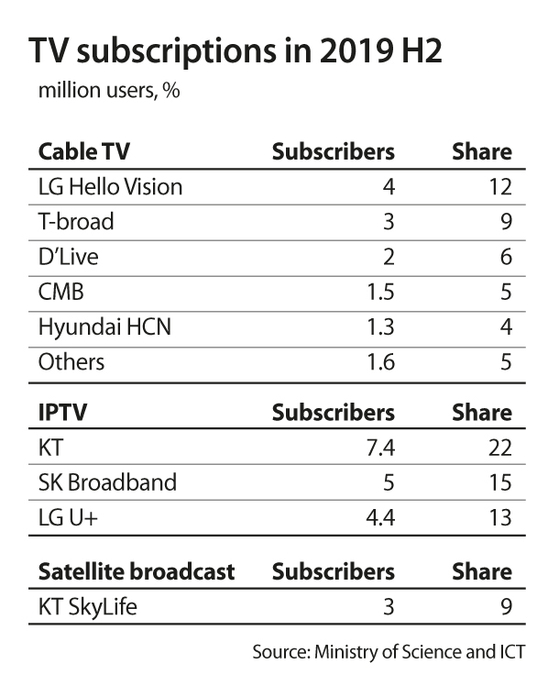 
Another conflict is ongoing between IPTV operator SK Broadband and five major broadcasters — the three terrestrial broadcasters, cable channel JTBC and CJ ENM. The five recently sent a joint complaint to SK Broadband, accusing the IPTV operator of violating contracts by changing policies without notifying them.

The issue arose when SK Broadband introduced plans for “Mobile Btv” as part of a large-scale overhaul of its IPTV service. Mobile Btv is a service designed to allow IPTV subscribers to watch content on their mobile phones and issue up to four user accounts per subscriber.

“It is understandable that the company introduced the mobile service to maintain the size of the subscription base in a rapidly changing media environment. But compensation for content supply must also match the number of additional network lines,” said a source at a terrestrial broadcaster.

But SK Broadband thinks its new platform benefits the companies.

“Due to disrupters like Netflix, the subscribers of monthly plans for access to terrestrial network and the time spent on those channels is decreasing. It was a win-win move for both the platform and content providers,” said an SK Broadband spokesman.

The changing media landscape is thought to be the main cause of the tension between cable TV operators and content providers.

As online streaming services like Netflix’s influence grows in Korea, the value of content providers increased as well as they find themselves with more options to sell their content. A demand for higher-quality content has also raised costs for studios, who then pass that cost on to their partners.


“The cost of content production has gone up due to rising standards of the consumers. This is why content providers are turning to cable TV operators to share the financial burden,” said Kim Hoi-jae, an analyst at Daishin Securities.