Shares gain for a third day as chipmakers rally

Shares gain for a third day as chipmakers rally 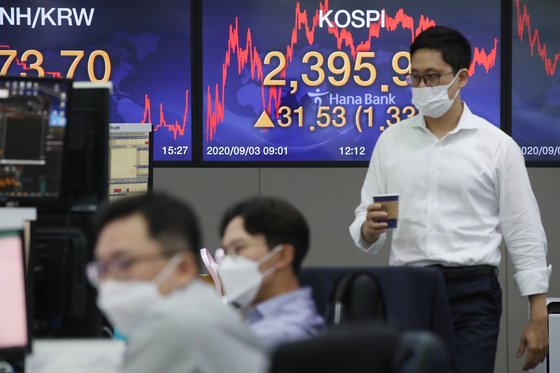 A screen shows the closing figure for the Kospi in a trading room at Hana Bank in Jung District, central Seoul, on Thursday. [YONHAP]


Shares extended gains to a third session Thursday, as major chipmakers rallied amid hopes for a recovery. The won fell against the dollar.

The Kospi's jump was largely attributed to the advances of chipmaking heavyweights, spurred by a 2.84 percent rally in the PHLX Semiconductor Index, a global gauge for the chipmaking sector.

The local currency was trading at 1,188.3 won against the U.S. dollar, up 2.9 won from the previous session's close.