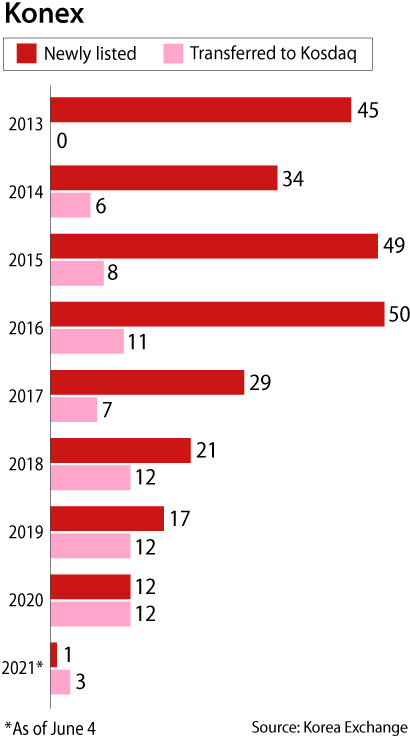 The Korea New Exchange (Konex) is struggling in terms of volume, initial public offerings and the upgrading of listed companies to higher-level exchanges.

Konex was first introduced in July 2013 as a market for smaller companies not yet big enough for a proper listing on the Korea Exchange.

Four companies, including ES Power Tools, were delisted between January and May this year. A total of five companies were delisted in 2019 and eight in 2020.

Not many Konex-listed companies succeeded in transferring to Kosdaq. One of the government’s goals for Konex was for it to be a feeder market to the junior exchange. So far this year, only three companies transferred from Konex to Kosdaq. Between 2018 to 2020, about 12 companies made the leap annually.

The daily trading volume of the Konex market is on average at about 8.8 billion won ($7.9 million) this year. That’s up 69 percent compared to a year earlier, but the trading was largely concentrated in some 20 companies. Of 137 companies listed on the Konex, around 70 have gone untraded so far this year.

The market capitalization of the Konex stood at 6.53 trillion won as of June 4. That’s about equal to the market cap of LG U+, one of the three mobile carriers in Korea. It's one third of the market cap of the K-OTC market, a relatively unpublicized corner of Korea’s capital markets that gives investors a chance to buy into companies that have not yet gone public, which totaled 21 trillion won.

The Korean government in 2018 eased the listing requirements for Kosdaq and allowed companies to make applications although they are losing money. Companies now can target the Kosdaq market easily, which has led to a decrease in demand for Konex listings.

Fees are also a problem.

Although financial authorities have offered financial aid for companies that are preparing to go public, the costs are still prohibitive for small- and medium-sized companies.

Konex says supportive measures are urgently needed in order to revitalize the market. The government said it is currently reviewing plans to improve the system and related regulations.

“We are currently reviewing some measures that can lower the costs of participating in the Konex market, such as the abolishment of the regulation for a minimum deposit,” said Lee Seung-han, head of the Konex market department at the Korea Exchange.