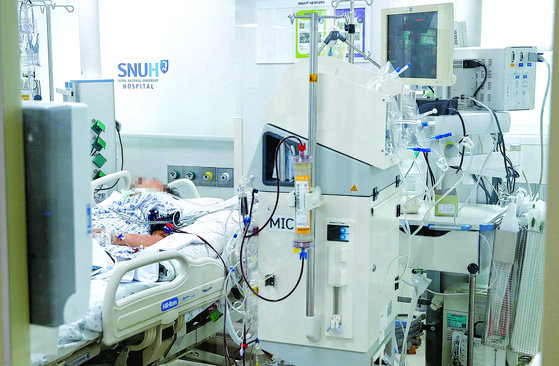 A patient in an I.C.U. unit of Seoul National University Hospital in central Seoul in this file photo in 2018. [JOONGANG ILBO]


Korea is running out of available I.C.U. beds at hospitals in the greater Seoul area, where the recent spike in Covid-19 cases has been centered, the government said Sunday.

There were just four I.C.U. beds available in hospitals in Seoul as of Saturday, according to the Central Disaster and Safety Countermeasure Headquarters. There were none available in Gyeonggi and Incheon.

The Korean government is reviewing options for transporting severely ill Covid-19 patients from the greater Seoul area to other hospitals with I.C.U. wards in the country, if necessary. There are a total of 552 I.C.U. beds in Korea, of which 42, including the four in Seoul, were immediately available as of Saturday, according to the disaster and safety headquarters.

Korea recorded 167 additional coronavirus cases on Saturday, 152 of which were domestic and 15 imported, according to the Korea Centers for Disease Control and Prevention (KCDC). Of the new patients, four were diagnosed in critical condition and have been hospitalized in I.C.U. wards.

Of Korea’s total 21,177 cases as of Saturday, 163 were in critical condition, according to the KCDC.

The nation’s daily cases remained below 200 for the fourth day in a row. But the government announced Friday that it will be maintaining the heightened social distancing recommendations and adding new restrictions to high-risk businesses in the greater Seoul area.

The Ministry of Health and Welfare said Friday that the heightened social distancing recommendations, at a so-called "Level 2.5," will be maintained in Seoul, Incheon and Gyeonggi for another week through Sept. 13, while Level 2 measures for the entire nation will be extended for two more weeks to Sept. 20.

Starting Monday, bakery, ice cream and bingsu (shaved ice dessert) chains in the greater Seoul area can’t allow their customers to eat or drink inside the establishments at any time; only takeout orders and deliveries are allowed. The restrictions are the same as those already in effect for coffee chains.

Some 671 vocational training institutes in the Seoul metropolitan area have to shut down as well and offer online courses only.

Churches in the greater Seoul area will remain closed until Sept. 20, during which time they can only offer online services. Churches outside the greater Seoul area can offer offline services, but local government offices will have the authority to decide whether to strengthen restrictions for religious communities within their jurisdiction, the central government said.

Other restrictions in the Seoul metropolitan area will remain the same.

Restaurants and bars, along with independent coffee shops and bakeries, can offer normal services and allow customers to eat and drink inside the stores — until 9 p.m., after which they can only provide takeout until 5 a.m.

All indoor sports facilities, indoor golf practice ranges and billiard halls will remain shut, as will day care centers. Hagwon, or private cram schools, with 10 or more people can only hold online classes. Visits to nursing homes and other nursing facilities for the elderly are banned as well.

In the greater Seoul area, all students in kindergarten through middle school will remain home and engage in online learning until Sept. 20. High schools will run up to a third of their total capacity.

Korea’s daily new Covid-19 cases were holding steady at around a dozen or less daily as of early August, but following clusters of outbreaks in schools, churches and cafes, new cases spiked to 279 by Aug. 15.

A massive protest involving thousands of people from all over the country in the Gwanghwamun Square on Aug. 15 only added to the uptick of cases.

As the daily additions of cases hit the 400s by the end of last month, the recommendations have been reinforced with additional directives from the government.

Covid patients may be going to general hospital wards