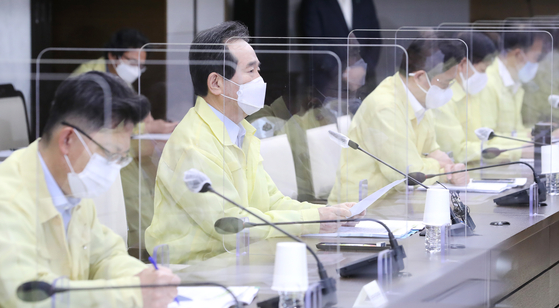 Prime Minister Chung Sye-kyun, second from left, presides over a Central Disaster and Safety Countermeasure Headquarters meeting on Wednesday from the Central Government Complex in Sejong City. In between participants are plastic dividers to prevent possible transmission of the coronavirus. [YONHAP]

The number of coronavirus patients now in serious or critical condition has more than doubled over the past week to reach 124, health authorities warned Wednesday, while new daily cases again remained below 300.

Officials raised alarm bells about the figure reaching triple digits, saying it was worse than when Korea’s largest cluster emerged from the Shincheonji Church of Jesus in Daegu last February. At one point the cluster was spawning more than 900 new cases per day. But even then, the number of seriously ill or critically ill patients combined remained below 100, officials said.

With many recent infections affecting the 60-plus age group, health officials Wednesday said many were developing severe symptoms of the disease, which calls for more I.C.U. beds.

Korea is currently undergoing its second-largest outbreak, one that emanated from the Sarang Jeil Church in Seongbuk District, central Seoul, on Aug. 12, and the antigovernment rally in Gwanghwamun, central Seoul, on Aug. 15. Authorities believe they’re related to each other, as hundreds of congregants from the church participated in the street demonstration even as cases were growing in their church community and health officials urged them to stay home.

“Over 40 percent of recent coronavirus patients linked to the church and rally are in their 60s or above,” said Vice Minister of Health and Welfare Kim Gang-lip Wednesday morning. “We’re expecting to see more severely ill patients in the future. The government will do its best to secure more hospital beds."

Of the 511 I.C.U. beds across the nation, 462 beds, or 90.4 percent, are currently occupied by seriously or critically ill patients, or people will less severe symptoms who haven’t been triaged to general wards yet, the Central Disaster and Safety Countermeasure Headquarters said.

Of the 49 beds left, six can’t be put to immediate use due to a dearth of medical equipment and professionals with I.C.U. training able to manage them, the headquarters noted.

Among the 43 beds that can be immediately used, only nine are in the greater Seoul area — Seoul, Incheon and Gyeonggi — where the majority of recent virus patients are being detected.

The headquarters said Wednesday it has selected 250 nurses to receive I.C.U. training from this month through the end of the year. In order to secure more I.C.U. beds, the headquarters vowed to designate hospitals that will be responsible for treating seriously ill patients only, and relocate recovered patients to general wards.

By the end of September, the goal is to find 110 more I.C.U. beds for seriously ill patients, and obtain another 103 by the end of this year, the headquarters said.

On the bright side, authorities said daily infections weren’t spiking this week.

“We’re still seeing more than 200 people test positive for the virus a day, but thanks to the public’s active participation in measures to prevent possible transmission, we’ve managed to avoid explosive increases” in daily cases, Jung Eun-kyeong, director of the Korea Centers for Disease Control and Prevention (KCDC), said Wednesday afternoon. 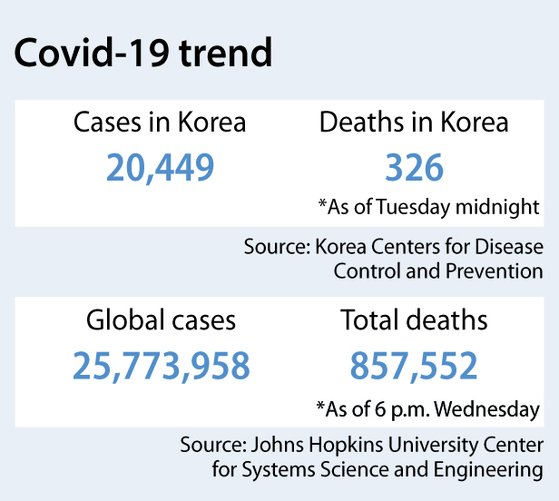 Jung urged the public to thoroughly practice social distancing for another week, saying the coming days would tell whether Korea sees steep peaks in cases or not.

Of the local cases, 98 were in Seoul, 79 in Gyeonggi, 14 in Daejeon, 13 in Daegu, 10 each in Incheon and Gwangju, seven each in Busan and South Chungcheong, five in Ulsan, three each in South Jeolla and North Gyeongsang, two in Gangwon and one each in North Chungcheong and Jeju Island.

Out of 14 imported cases, seven were from the United States, two each from the Philippines and Indonesia, and one each from Pakistan, Russia and Ukraine.

As of Wednesday at midnight, Korea had counted 20,449 Covid-19 patients in all.