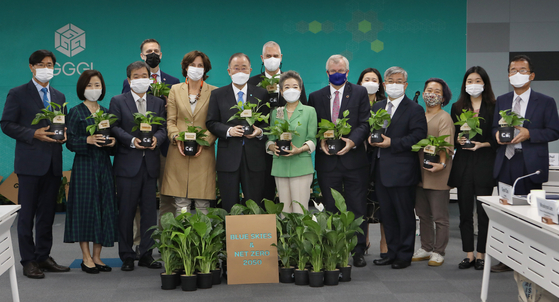 From fifth from left, the Global Green Growth Institute (GGGI) President and Chair Ban Ki-moon; Yoo Young-sook, chairwoman of the board of directors at the Climate Change Center; and British Ambassador to Korea Simon Smith join representatives of other members of the "Blue Skies and Net Zero 2050 Campaign" at GGGI's conference on the campaign on Monday at the institute in central Seoul. [PARK SANG-MOON]


Recognizing Monday as the International Day of Clean Air for Blue Skies, the Global Green Growth Institute (GGGI) and embassies in Seoul called for global efforts to work with civic groups to combat greenhouse gas emissions, climate change and other air pollution crises.

“Today, Sept. 7, is a special day,” Ban Ki-moon, president and chair of the GGGI, said during his opening remarks for a climate change conference at the institution in central Seoul on Monday. "Led by the Korean government, the UN General Assembly last year adopted by consensus the resolution to designate this day to help improve air quality, raise awareness of air pollution and acknowledge that air quality and climate change mitigation are very closely linked."

The conference was joined by members of the “Blue Skies and Net Zero 2050 Campaign,” launched last December by GGGI and the Climate Change Center, which includes the embassies of Denmark, France, Britain, Canada, Italy and the Netherlands, along with the European Delegation in Korea and civic groups including Green Environment Youth Korea.

In addition to addressing the fine dust issue in Korea — Seoul ranked as one of the worst cities in terms of worst air pollution problems in 2017 — the campaign aims to request that the Korean government define its long-term strategy for the country to achieve net-zero emissions by 2050.

"Net-zero" refers to removing greenhouse gas emissions at the same rate as they are being produced — typically achieved through a combination of aggressively cutting emissions and undertaking measures like forest restoration to offset those new greenhouse gases being introduced into the atmosphere.

The most recent government plan to address the issue — the so-called Green New Deal — does not specify annual reductions in greenhouse gas emissions needed for Korea to go net-zero by 2050, a goal being adapted by many nations around the world, especially signatories to the Paris climate agreement.

Civic groups present at the conference Monday emphasized that Korea needs all hands on deck to reduce its emissions.

“I firmly believe that the Green New Deal will be led by the government but must be completed with civil societies,” said Yoo Young-sook, chairwoman of the board of directors at Climate Change Center, a nongovernmental organization on climate change in Korea. “The center will be sparing no effort to expand and strengthen the role of civil society [...] to successful implementation of the Green New Deal.”

It is also part of the campaign’s goals to outline a five-year Nationally Determined Conditions (NDC) target for the Paris Agreement in the lead up to the 26th United Nations Climate Change Conference of the Parties (COP 26) scheduled for 2021 in Glasgow. Korea has yet to submit its NDC target set through 2025, due at the end of this year.

“Korea is one of the world’s top-10 global emitters [...] Korean 2050 net-zero declaration will be an immense statement of leadership in raising the global ambition on climate change,” said Simon Smith, British ambassador to Korea. “COP 26 will be one of the last chances for the international community to mitigate damaging risks for climate change.”

Gas and an old guitar