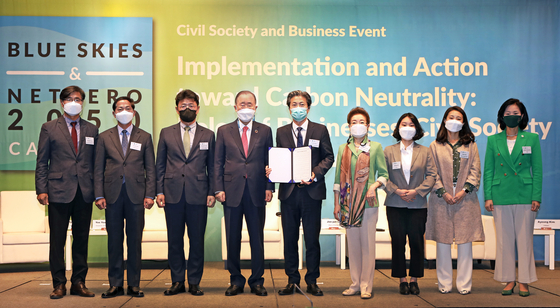 Ban Ki-moon, president of the Global Green Growth Institute (GGGI), fourth from left; Lee Tong-q, director-general of the climate, energy, environmental and scientific affairs bureau of the Ministry of Foreign Affairs, fifth from left; Yoo Young-sook, chair of Climate Change Center, sixth from left; and other participants of the forum on implementation and action toward carbon neutrality and the role of businesses, civil society and local governments hosted by the GGGI and Climate Change Center at the Westin Josun Seoul on Wednesday. [PARK SANG-MOON]


Korea should be two times more ambitious in its target to reach net zero by 2050, said Ban Ki-moon, president of the Global Green Growth Institute (GGGI) and former secretary general of the United Nations, at a conference hosted by the GGGI and Climate Change Center in Seoul on Wednesday.

“I’d like to urge the Korean government to set an ambitious Nationally Determined Contributions [NDCs] target line with [the commitments by] the European Union and the United States, by committing to reduce the country’s greenhouse gas emissions by 50 percent by 2030,” Ban said, in opening the conference joined by heads of cities, civil societies and businesses at the Westin Josun Seoul.

NDCs are national goals put forward by each party aimed at drastically lowering greenhouse gas emissions to limit global warming to a change of no more than 2 degrees Celsius (3.6 degrees Fahrenheit) compared to pre-industrial levels, as per the Paris Agreement at the UN Conference of the Parties (COP) in 2015.

Korea’s NDCs include reducing its total greenhouse gas emissions by 24.4 percent of the level in 2017, which was 709.1 million metric tons of carbon dioxide equivalents, by 2030. The Korean government has said that it will make another update on the target before 2025, to ensure that the country reaches carbon neutrality, or net zero, by 2050.

Net zero is the term used to describe removing greenhouse gas emissions at the same rate as they are being produced — typically achieved through a combination of aggressively cutting down on emissions and undertaking measures like forest restoration to offset new greenhouse gases being introduced into the atmosphere.

Heads of local governments, civil societies and businesses in and out of Korea joining the forum pledged to do more on climate action.

“SK Group companies were the first in Korea to join the RE100 when we did last year,” said Lee Hyung-hee, president of SK Supex council’s social value committee. “We were not at all early joiners of the global race by corporates to transform the way they operate to help their nations reach net zero. This is the reality for many of the companies, that energy transformation is not easy. But that’s not a good enough reason not to try. The transformation is difficult, but it’s necessary.”

RE100, or Renewable Energy 100, is a global initiative by companies to run on 100 percent renewable energies by 2050.

Korea intends to phase out coal usage by 2034, by closing down 30 aging coal power plants and replacing 24 of them with liquefied natural gas plants. It also intends to invest in solar, wind and hydrogen energy, in order to increase the production capacity of renewable energy from 20.1 gigawatts to 77.8 gigawatts by 2034, according to a plan announced by the Ministry of Trade, Industry and Energy last year.

One of the technological skills eyed by the corporate sector to aid in their energy transformation effort is carbon capture, utilization and storage (CCUS) technology.

“If CCUS can be licensed and used throughout Korea, it will help with fighting climate change more immediately, as we’re still developing the technology to produce ‘green hydrogen,’” said Lee Sang-kyoo, vice president of the environment and quality management department of Korea South-East Power Corporation, which generates 10 percent of the electricity used in Korea, as of December 2020.

Hydrogen produced in Korea currently is gray or brown hydrogen, meaning it comes from burning combustible fuels. Green hydrogen requires generation from the use of natural resources like solar or wind power, which, at the moment, is still very expensive.

CCUS technology involves extracting carbon dioxide from the gas produced from combusting fossil fuel. The carbon is then liquefied and transferred to a storage deep underground or undersea where it can’t harm the environment, before being transformed into usable energy.

Previous attempts in Korea to try CCUS have not gone far. In 2016, two carbon dioxide storage facilities on a test run — one on the ground and one offshore in Pohang, North Gyeongsang — were shut after an earthquake. Operations never resumed as a study released soon after suggested the CCUS facilities could have caused the earthquake.

As important as it is for the private sector to contribute to climate action, the responsibility for energy transformation should also be borne by local governments, said Goyang Mayor Lee Jae-jun.

“There are simple changes we can make on the local government level, such as changing the regulation on building new structures in the city so that the rainwater reservoir, a required function for some buildings, are not to be built underground, but just below the rooftop,” Lee said. “This way, we’re not using extra energy to move the rainwater from underground level to the rooftop level, before they are pumped into bathrooms and such on all floors.”

Goyang, Incheon and Yeosu are a few of Korea's cities hoping to host the COP meeting in 2023.

Kim A-yeong, a member of U-Savers, a group of college students calling for more nationwide action to battle climate change, reminded the audience at the forum that the younger generation will be the ones most impacted by climate change.

“We are aware that some companies are only pretending to be green and pursuing ESG [environmental, social and corporate governance] goals,” Kim said. “And many companies have not yet made transparent their usage of plastic. There will have to be specific goals set by companies in battling climate change, because if we do not change the way we live today, we will not have a world to live in anymore.”

Participants of the forum submitted a pledge to the Ministry of Foreign Affairs to work together to combat climate change ahead of the Partnering for Green Growth and the Global Goals 2030 (P4G) Seoul Summit on May 30 and 31.