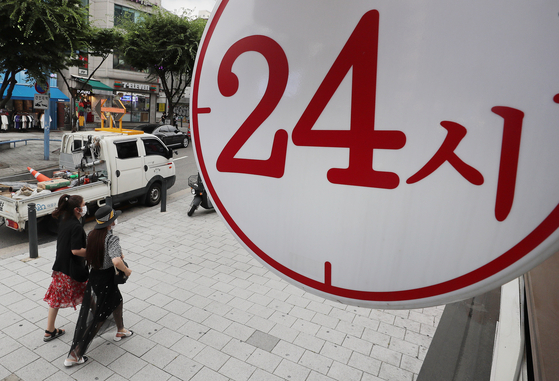 A sign at a restaurant in Hongdae, Seoul, on Wednesday says it is opened 24 hours. However, as the number of people confirmed with Covid-19 has exceeded 1,200 on Tuesday, the government extended its social distancing that limit business hours to 10 p.m. for another week. KDI warned that the recent surge in Covid-19 cases and Delta variant could impact the economic recovery. [NEWS1]

The economic recovery could face a setback as Covid-19 case numbers rise and the Delta variant threatens the country, a government think tank warned.

In an economic report released on Wednesday, the Korea Development Institute (KDI) noted that economic uncertainty remains high with the spread of the variant and the number of people with Covid-19 rising.

The state-owned think tank noted that the recovery of the domestic economy, particularly the service sector, could be challenged.

“The recent surge in new infections and concerns about the variant spread may limit the recovery of domestic demand, especially in face-to-face services,” the report said.

Manufacturing will continue to grow as exports are seen remaining strong. Exports have increased around 40 percent year-on-year for three consecutive months.

KDI noted improvement in the automotive industry, which recently struggled with production due a shortage of semiconductors.

Even if there are temporary setbacks from a resurgence of cases, a moderate recovery is possible, the KDI said.

On Tuesday, 1,212 people tested positive for the novel coronavirus. This is the second-highest daily figure since 1,240 on Dec. 25, raising concern of a major wave.

On Wednesday, the government extended its social distancing regulations in the greater Seoul area for another week, and this includes capping gatherings at four people.

The government was initially planning to ease the restrictions by allowing as many as six people to gather to boost spending.

If the situation doesn’t improve, the government may consider further tightening the regulations to the highest level, in which only two people will be allowed to meet after 6 p.m.

Last month, the government set its economic growth target for this year at 4.2 percent, up from the initial target of 3.2 percent.

If that is achieved, it would be a strong rebound from the 1 percent decline in 2020 and the fastest growth since the 6.8 percent in 2010.

The domestic market recovery was to play a significant role in achieving this year’s economic growth target.

In order to boost spending, the government is distributing money to all individuals except the top 20 percent by income and starting a cash-back program on credit card spending.

S&P on Wednesday raised its outlook on Korea’s economic growth for this year from 3.6 percent to 4 percent.

It noted that robust external demand contributes to the country’s economic growth, and the biggest constraint is domestic demand, especially in terms of private consumption.