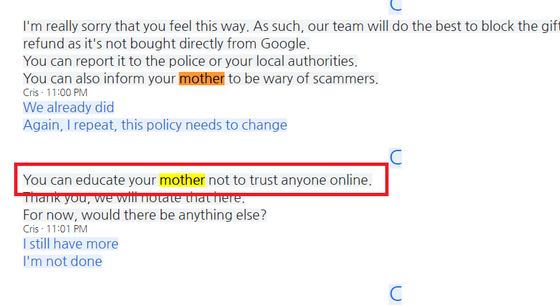 Recently, a 60-year-old woman received a message from her daughter saying that she was texting via computer because her phone was being repaired and that she needed money.

She asked her mother go to the nearest convenience store, purchase 150,000 won ($126) worth of Google gift cards, take pictures of the serial numbers and send the images.

It was all a scam.

“I purchased 30 gift cards from six convenience stores in the rain,” the woman said. “I thought my daughter was asking out of desperation.”

She had spent 4.5 million won.

The woman said the scammer pretending to be her daughter thanked her and said that they would be sending the woman money to buy a dress.

She only realized that she was being scammed when one of the convenience store owners told her that there were a lot of scams related to gift cards and asked if she had called her daughter.

The convenience store owner asked those questions as it was suspicious for an elderly woman to be purchasing Google gift cards, which are used for mainly online game money.

The number of messenger phishing scams has been increasing, yet there haven’t been specific measures that would bring a full stop to such scams.

The difference with past scams is that the latest scam asks the victim to send the serial numbers of gift cards rather than sending the money by wire.

Unlike stealing credit card numbers through hacking or planting a malicious code via smartphones, purchasing gift cards is considered a normal transaction between the buyer and the gift card issuer.

Tracking down the scammers is more difficult when compared to wiring money as there’s no good target for tracing, such as a bank account under a specific person.

It’s also easy to liquidate the gift card via internet.

According to the police, financial damage from messaging phishing is estimated at around 12.8 billion won between January and April. That’s a 52 percent increase compared to the same period a year ago.

The police in June issued a public alert about people sending messages with apps pretending to be family members. It noted that in general they ask for the serial numbers of gift cards, as suspicious wires can be canceled by banks. With the messenger gift card scam, not much can be done once the serial numbers are sent.

The FSS said the report needs to be made to the police.

Google does accept reports on gift card scams, but only on online, and the company only confirms whether the gift card has been used or not.

If the card has been used, Google says there’s nothing that it can do, and if the card hasn't been used yet, the best advice is to register the serial number to the person’s own account.

It’s an inconvenience considering that most of the victims are those in their 50s and 60s.

“In April, we received a cooperation request from the police against scams,” said a Culture Land official. “Since then, through our online bulletin board, we have started to accept scam reports and created consulting guidelines where we will respond immediately if it has the word ‘fraud’ or ‘theft’ in it.”

The 60-year-old woman’s daughter even sent an email to Google reporting the scam and asking for a refund. An emailed reply said while it will “do its best to block” the gift cards from being used, the company denied refund as the cards were not directly purchased from Google.

“I received the answer ‘You can educate your mother to not trust anyone online,'” the daughter said. “The hands-off response from such a major company like Google angers me.”

Google Korea responded to the JoongAng Ilbo that while it could not disclose the details about the management of Google products, it added it will do its best to prevent fraud.

Google adds up its contributions to Korea