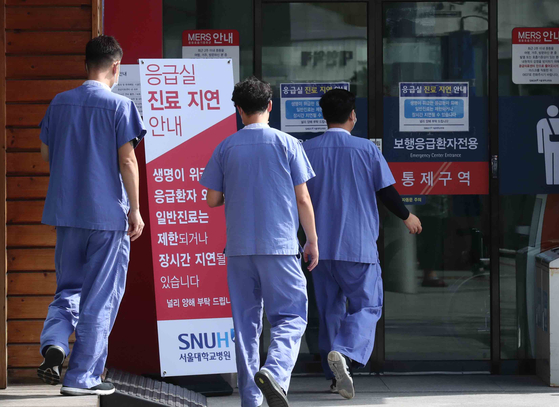 
While thousands of trainee doctors returned to work at major general hospitals Tuesday — 19 days after walking out in protest of government medical reform plans — others are opting to continue their strike.


A complete normalization of the health care situation at hospitals is expected to take more time. Likewise, the issue of whether the government will give medical students another shot to take their state medical licensing exams after they boycotted the tests can emerge as a factor that could lead to another strike.

The hospitals said the trainees can return to their tasks after testing negative for the coronavirus.

But some trainees at other general hospitals nationwide refused to return. Individual hospitals put to separate internal votes on whether to end the walkout, in spite of a young doctors’ emergency response committee representing interns, residents and fellows deciding on Monday to end the walkout that kicked off Aug. 21.

The government and the Korean Medical Association (KMA) reached a deal last Friday to suspend plans to increase medical school admissions and establish a public medical school until the Covid-19 situation subsides in exchange for ending the doctors’ collective action.

But the deal has been fiercely protested by some members of the Korean Intern Resident Association (KIRA) who said their opinions had not been properly represented. Amid continued backlash, the leadership of the young doctors’ committee — which has led negotiations with other medical groups, lawmakers and government officials — including its head Park Ji-hyun, the president of KIRA, stepped down en masse Monday.

A new emergency response committee of young doctors was launched Tuesday, which could be another factor that can impact the normalization of medical services after some hospitals were forced to restrict emergency rooms and postpone nonessential surgeries amid the ongoing coronavirus outbreak. The new committee is set to hold a meeting Tuesday evening to plan its direction.

Likewise, the government went ahead with holding the Korean Medical License Examination Tuesday, which has been boycotted by 86 percent of medical students.

The Ministry of Health and Welfare on Tuesday maintained that it will carry out the state exam, which already has been postponed by a week, as planned.

Doctors’ groups have demanded the government give the medical students another chance to sign up, but the government stressed that it is unfair to give any additional exceptions as the state-run exam has already been postponed once and applicants had until Sunday to sign up again.

“Because we already postponed the exam schedule once and extended the application period, we are not considering any plans to provide any additional opportunity to sign up,” Sohn Yong-rae, a Health Ministry spokesman, said in a briefing Tuesday. “In a situation where the medical students are boycotting the exam themselves, it is asking the government to achieve the impossible by asking to support them.”

KIRA has warned that it can always stage another walkout if the government doesn’t give the medical students another shot.

Only six medical students showed up at the Korea Health Personnel Licensing Examination Institute in Gwangjin District, eastern Seoul, for the first exam day Tuesday morning, compared with about 100 that have showed up in previous years.

The state exam will be carried out between Sept. 8 and Nov. 20.