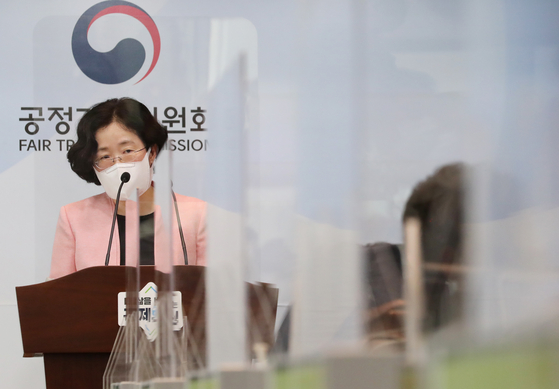 Fair Trade Commission Chairwoman (FTC) Joh Sung-wook holds a press briefing on her first anniversary as the head of the antitrust agency at the FTC headquarters in Sejong on Tuesday. [YONHAP]


Tech companies have been put on notice by the Fair Trade Commission (FTC), with Chairwoman Joh Sung-wook saying that the antitrust regulator will act decisively if it finds any violations by them.

She also noted the FTC will conclude its review of the acquisition of Baedal Minjok, or Baemin, by Berlin's Delivery Hero before the end of the year.

In a press briefing held on Tuesday celebrating her first anniversary as the head of the commission, Joh said the FTC is keeping an eye on the app commission system.

The FTC "will not allow any anticompetitive practices and will punish those that engage in them,” Joh said.

The FTC chairwoman denied that the antitrust agency has become soft, saying that the commission is simply more thoroughly reviewing the evidence in applying the law.

The commission has been accused by civic groups of going easy on Mirae Asset Group Chairman Park Hyeon-joo after the brokerage was found to have engaged in illegal related-party transactions. In the case, the company was fined 4.39 billion won ($3.68 million).

If Park has been prosecuted, the country's largest brokerage would have been prevented from entering the commercial paper and investment management account (IMA) markets.

“The FTC hasn't become soft,” Joh said. “I would like to stress that we have evaluated properly the information provided by the investigation department.”

She said the case clearly demonstrated the evidence-based decision-making of the FTC as well as its neutrality and the independence.

“If there is insufficient evidence or lack of a legal basis, we will not report the case to the prosecutors,” Joh said.

Cho also defended the FTC on its approach to a complaint against Apple in which it allowed the company to come up with its own remedy.

Apple Korea was accused of forcing local telecommunication companies — SK Telecom, KT and LG U+ — to pay for Apple’s marketing expenses and repairs under warranty since 2016.

“In a rapidly changing industry, if a case takes five to 10 years, the impact on the market will be limited,” Joh said. “The consent resolution system contributes to quickly helping those that have been negatively affected and influencing the market.”

She said while the FTC will further strengthen its investigation capacity, it will further enhance the consent resolution system, which compels the accused to voluntarily make changes to their unfair business practices, if needed.

The FTC chairwoman also commented on the acquisition of Baemin by Delivery Hero.

"As the merger has a huge impact on the market, we are currently reviewing the case thoroughly," Joh said. "The results of the review will be completed by the end of the year."

In December, Delivery Hero announced the purchase of Woowa Brothers, the operator of Baemin, in a $4 billion deal.

Delivery Hero already owns Yogiyo, and the concern is that it will monopolize local food delivery with the acquisition of Baemin.

In June, Yogiyo was hit with a 468-million-won fine by the FTC for forcing restaurants that use its app to lower prices on Yogiyo services or raise the prices for competing services. The company engaged in these practices between 2013 and 2016.

Baemin was criticized for trying to raise fees in April.

Joh hinted that the commission was near a decision on the merger between Hyundai Heavy Industries and Daewoo Shipbuilding and Engineering.

Joh said one of the achievements during her first year was a crackdown on undisclosed advertising on Instagram and YouTube.

“It sent a warning,” Joh said.

She added that while there are concerns over several influencers committing such violations, she stressed Instagrammers and YouTubers must follow the rules for voluntarily disclosing payments from advertisers.