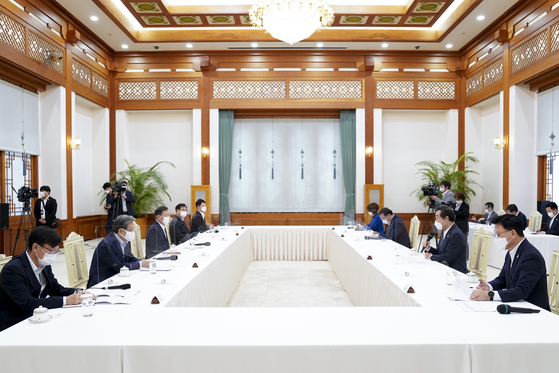 
Most Koreans will be receiving 20,000 won ($17) a month in support of their smartphone bills, according to a plan agreed upon by the ruling Democratic Party.

It also decided to extend a tax break to landlords that lower rents.

These agreements were made during a meeting between President Moon Jae-in and the new leadership of the Democratic Party on Wednesday, including Lee Nak-yon, the first Prime Minister of the current administration and the new party chief.

According to the Democratic Party, party leader Lee suggested including the 20,000-won subsidy for smartphone bills in the fourth supplementary budget to ease the burden on people who have been devastated by the coronavirus crisis.

Party spokesperson Choi In-ho said party leader Lee told President Moon that while the amount is small, offering support for telecommunications bills will provide comfort to people who are exhausted by the crisis.

President Moon reportedly agreed, adding that telecommunication bills have increased as most people are more engaged in non-contact activities due to the social distancing.

According to the Democratic Party, the government has accepted the request of the party to make a final decision after reviewing the issue.

There were early reports that those aged between 35 to 49 were to be excluded as they are relatively better off, but it was decided that anyone above the age of 17 will qualify.

The ruling party also said the Blue House and the leadership of the party have also discussed extending tax breaks given to landlords lowering rent.

The government earlier this year provided a 50 percent tax credit on the amount that the landlord lowered on small businesses' rents. However, the tax credit only applied cuts made by the end of June.

The ruling party and the government may be mulling an extension of the tax credit until the end of the year.

"Floor leader Kim suggested extending the tax credit to landlords will help in creating an environment of people helping each other in times of crisis,” spokesman Cho said.