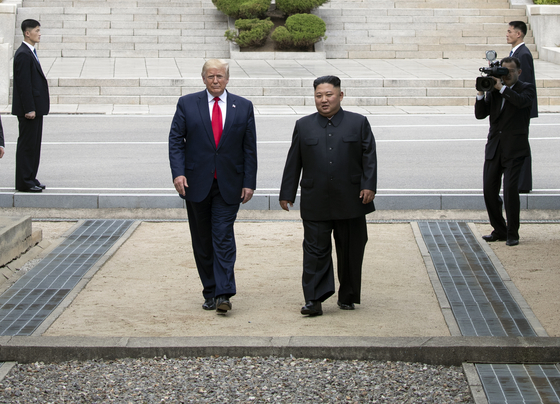 U.S. President Donald Trump, left in center, and North Korean leader Kim Jong-un walk on the North Korean side of the demilitarized zone in their third ― and impromptu ― meeting at the truce village of Panmunjom in June last year. [YONHAP]


Newly disclosed correspondence between North Korean leader Kim Jong-un and U.S. President Donald Trump revealed Kim had strongly hoped for a third summit last year, even after their second had ended in a debacle that February.

Washington Post journalist Bob Woodward obtained 27 so-called "love letters" exchanged between the two leaders, which are expected to be disclosed in his new tell-all book "Rage," to be released on Sept. 15.

Two of those were published by CNN on Wednesday, both from Kim to Trump, detailing the dictator's hopes for additional meetings with the president, and written in notably flowery language.

In the second of the two letters, sent on June 10, 2019 on the first anniversary of the first Trump-Kim summit in Singapore, Kim recalled their meeting as "an imprint still indelible" in his memory, before asserting a confidence that their "deep and special friendship" would become a "magical force" in realizing their goals.

"I believe the one day will come sooner or later when we sit down together to make great things happen, with the will to give another chance to our mutual trust," Kim wrote. "Such a day should come again. It may well be recorded as yet another fantastic moment in history."

Trump, according to excerpts of Woodward's book, had apparently been flattered by these letters, saying at one point that Kim "tells me everything," including a grisly description of how he had executed his uncle, Jang Song-thaek, by a firing squad in 2013.

The president was also assuredly confident about his meetings with Kim, brushing aside criticisms that they lent legitimacy to the leader of one of the most secretive countries in the world.

Equally dismissive were Trump's views on assessments by his own intelligence officials that Pyongyang would never relinquish its nuclear weapons, according to Woodward. At one point Trump told the journalist that the CIA had "no idea" how to handle Pyongyang.

On Monday, perhaps in response to the upcoming book and its potentially damning effects to his reelection bid less than two months away, Trump said his use of the phrase "love letters" to describe his correspondence with Kim was just sarcasm.

Trump has repeatedly heaped public praise on his exchanges with Kim, including one rally two years ago when he said he "fell in love" with the dictator in Singapore.

That meeting certainly made history as the first time sitting leaders of the two adversaries met, but gave way to little in the way of a practical agreement on the North's denuclearization pledges.

A second attempt was made at Hanoi, Vietnam, in February last year, but Trump walked out of the summit prematurely after feeling the North's proposal to scrap its nuclear complex at Yongbyon was an insufficient trade-off for sanctions relief.

Though Pyongyang has insisted the personal relationship between its leader and Trump remains on good terms, it has since withdrawn back into its prior isolationism and vowed to expand its nuclear arsenal.