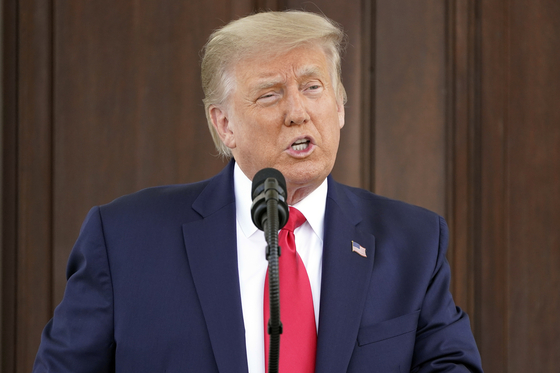 President Donald Trump speaks during a news conference on the North Portico of the White House, Monday, Sept. 7, 2020, in Washington. [AP Photo/Patrick Semansky]


U.S. President Donald Trump on Monday denied that he regarded his correspondence with North Korean leader Kim Jong-un as “love letters,” saying his past use of the phrase was sarcastic.

“Just heard that Wacko John Bolton was talking of the fact that I discussed 'love letters from Kim Jong Un' as though I viewed them as just that,” Trump wrote on his Twitter account Monday.

“Obviously, [I] was just being sarcastic. Bolton was such a jerk!"

Trump’s somewhat belated about-face stands at odds with the effusive praise he has heaped on those letters exchanged with Kim at almost every turn in their diplomatic engagements for the past two years.

“He wrote me beautiful letters, and they’re great letters,” Trump said in a rally almost exactly two years ago, following his much-touted first summit with Kim in Singapore that June. “We fell in love.”

Yet according to Bolton, who was Trump’s national security adviser throughout much of that process, the president never truly intended to reach an agreement on Pyongyang’s denuclearization, but was largely fixated with the optics of staging a summit with the reclusive state and its leader.

The two countries’ unbridgeable differences ultimately came to light at Trump and Kim’s second meeting in Hanoi, Vietnam, in February last year, after the president walked out on the North’s proposal to scrap its nuclear complex at Yongbyon in exchange for sanctions relief.

Though Pyongyang has insisted the personal relationship between its leader and Trump remains on good terms, it has since withdrawn back into its prior isolationism and vowed to expand its nuclear arsenal.

Trump’s attempt to now distance himself from the letters may be connected to a tell-all book from Washington Post journalist Bob Woodward, which is nearing release on Sept. 15, just weeks ahead of Trump’s reelection race in November.

According to its publisher Simon & Schuster, the book, titled “Rage,” may contain the contents of 25 personal missives exchanged between Trump and Kim that Woodward obtained.

A description of the book on Amazon states that Kim “describes the bond between the two leaders as out of a 'fantasy film,' as the two leaders engage in an extraordinary diplomatic minuet.”

That number, 25, generated surprise among observers, given that there were only around a dozen instances in which Trump or North Korea have revealed some sort of correspondence was exchanged.

The most recent alleged exchange took place in April, when Trump said in a briefing he received a “nice note” from Kim before reiterating they continued to share a “good relationship.”

The next day, however, Pyongyang publicly denied it had ever sent such a note, questioning Washington’s motives for what it called an “ungrounded” assertion.

Speculation was rampant earlier this year that the Trump administration may attempt a last-ditch effort to reach a deal with the North ahead of the presidential election, though nothing has yet materialized.

In fact, the diplomatic venture with North Korea has been all but absent from Trump’s campaign rhetoric, suggesting the White House itself is uncertain whether it has been as successful as the president has claimed in the past.

During his hour-long acceptance speech at the Republican National Convention last week, Trump expounded on the fight against ISIS, the elimination of Iranian General Qasem Soleimani and the signing of a peace deal between Israel and the United Arab Emirates (UAE) as his major foreign policy achievements, but the talks with Kim received no mention.

One notable exception to that reticence was a comment Trump made last month, when he said he would make “deals with North Korea very quickly” if reelected in November.

By contrast, Trump’s Democratic rival Joe Biden said in January he would not continue Trump’s diplomacy with the North if elected, but would instead use sanctions to further isolate the regime.