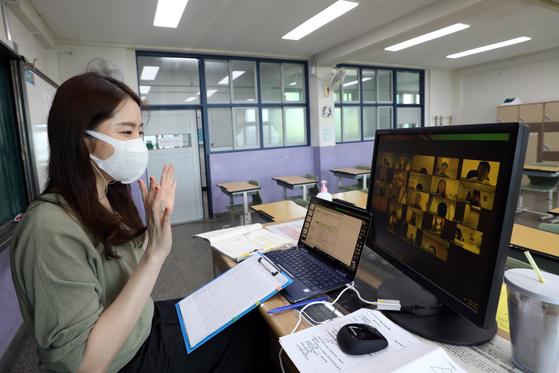 A teacher at Bongeun Middle School in Gangnam District, southern Seoul, conducts an interactive online class with her students on Aug. 26 after schools in the capital area reverted to remote learning because of a spike in coronavirus cases. However, parents are complaining that their children spend most of their time watching prerecorded lessons instead, while some students have yet to have face time with their teachers in the new fall semester. [NEWS1]


Parents are balking at the poor quality of online classes for their kids as remote learning extends into a second semester amid a spike in domestic coronavirus cases.

Some parents expressed particular concern that their children haven't even been able to see their teachers some 10 days into the fall semester.

Ms. Kim, a working mother of two, remains concerned about remote lessons, as her younger daughter has yet to even hear her elementary school teacher’s voice since the new semester started.

Her older daughter has at least two or three Zoom classes per week, where she can have interactive lessons with her teacher and classmates, but her younger daughter has yet to have a face-to-face session.

Kim believes that her child has lost the drive to learn, simply staring at the computer screen all day without substantial interaction.

"I cautiously suggested to the teacher, 'If you could even give a phone call to check on how the child is doing, and how she is following along, it would be a great motivation for her,’” Ms. Kim said.

The spike in Covid-19 cases last month has led to thousands of kindergartens and elementary, middle and high schools reverting to remote lessons in the Seoul, Gyeonggi and Incheon area until at least Sept. 20.

Parents especially have been venting their frustrations over the poor operation of remote lessons, which ideally should balance interactive sessions with prerecorded lessons.

When the pandemic forced schools to unexpectedly kick off the new spring semester remotely in April, they relied heavily on prerecorded lectures provided by the Korea Educational Broadcasting System (EBS) and YouTube lessons. But parents argue that shouldn’t be the case for the fall semester, after schools had plenty of time and experience to prepare for higher-quality remote lessons.

Such complaints are especially high among parents with children in public schools, which have a relatively low percentage of interactive Zoom-style lessons between teachers and students.

Level 2.5 social distancing measures have been in place since the end of August.

Lee added, “I am not sure why school teachers who were accepted to education colleges with outstanding grades, and passed the teacher certification examination, are not able to adjust as quickly as private academies.”

Many parents with children in public schools were enraged when they heard that some private elementary, middle and high schools are conducting all lessons through real-time interactive online classes.

Several Blue House petitions have been submitted to protest the poor quality of public online classes.

“This is not remote learning. How long will our children be neglected?” reads one petition submitted at the beginning of the month. It had gathered over 29,800 signatories as of Thursday noon.

The petitioner mentions concerns from parents that their child, supposed to be learning remotely, “is just having a self-study session on YouTube.”

The petition also pointed out, “A true remote lesson is when the teacher meets the child’s eyes and conducts roll call.”

This petition's author requested that the teacher “just communicate with the student for one hour.”

But teachers likewise are pointing out that there isn't enough substantive support from their schools, local education offices and the government to conduct effective remote lessons.

“Some 70 to 80 percent of current teachers do not know how to hold real-time interactive online classes, but the office of education is not conducting any teachers’ training on how to conduct Zoom or Google classes,” said one teacher at a school in the capital area.

The teacher pointed out that the government is simply recommending the use of e-lessons provided by the Korea Education and Research Information Service (Keris) and that “schools are stingy with the purchase of equipment such as webcams and mics and only emphasize the role of the teachers.”

However, some teachers are also not showing much flexibility, causing division between younger educators who are capable of conducting interactive classes with their students and older ones who complain about the difficulties of adjusting to virtual lessons.

“Teachers are saying that interactive lessons are difficult, that they can’t do it, and because of such an atmosphere in teachers’ groups, the younger teachers who are capable of conducting such classes are not able to take charge," said a principal at a public elementary school in Gangnam District. "There are some young teachers who are holding interactive classes without letting other teachers know.”

The Ministry of Education has encouraged increasing interactive classes, but also says it will be difficult to do so in a uniform manner.

In August, the Education Ministry conducted a survey of 225,000 teachers and found that interactive classes constituted just 14 percent of total lessons.

“We plan to increase the ratio of interactive lessons through indirect support, such as training programs and the provision of devices and content,” said an Education Ministry official. “Depending on the subject, it may be more effective to prerecord content or focus on assignments, so it is difficult to just stress conducting real-time lessons.”

Education Minister Yoo Eun-hae likewise told the National Assembly’s Education Committee on Aug. 25 that the percentage of interactive classes in the first semester was about 10 percent, but that “it should be possible to bring this up to 20 to 30 percent in the second semester.”

But parents are urging education authorities to take a more aggressive approach in improving remote learning.

“We don't even expect 100 percent interactive classes,” said one parent from Mapo District, western Seoul. “Isn’t it a problem that we are in the second semester and remote lessons are students just watching prerecorded videos? The government needs to step forward and improve this situation.”