Children at Daejeon Gayang Elementary School leave school Wednesday, a day before it was set to shut down after four coronavirus infections were detected among students in two schools nearby. [NEWS1]

Korean health authorities Wednesday said they detected what appears to be coronavirus transmission among students in a school, nearly a month after classrooms reopened.

The country has seen numerous cases of transmission among students and children, but no transmission in a school zone had been detected by health authorities prior to Tuesday night, Jung Eun-kyeong, director of the Korea Centers for Disease Control and Prevention (KCDC), said in a Wednesday press briefing.

Jung said contact tracing is ongoing to determine whether two infections in Daejeon — Korea’s fifth largest city, 90 miles south of Seoul — indeed took place inside a school building, but that information so far indicates that was the case.

A fifth grader at Daejeon Cheondong Elementary School, the city’s patient No. 115, is suspected to have transmitted the coronavirus to two of his close friends, the KCDC said, one who’s in the same class and another in a different class of the same school. The second friend goes to the same hagwon, or cram school, as the original patient.

Both friends tested positive for the coronavirus Tuesday, as health officials were testing everyone whom 11-year-old Patient No. 115 had close contact with recently. Both were asymptomatic.

Patient No. 115 was infected by his mother, who is in her 40s and runs a day care center. Patient No. 115’s older brother, who attends a middle school, also came down with Covid-19, the disease caused by the coronavirus. The mother contracted the virus from a man in his 30s, Daejeon health officials said, but how he got infected remains a mystery.

No links have been established between the four cases and a string of coronavirus infections connected to several door-to-door sales businesses in the city, to which at least 78 Covid-19 cases have been traced, making it Daejeon’s largest cluster to date. 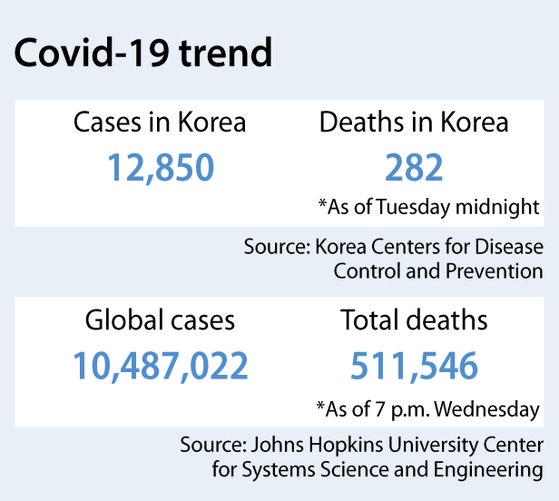 Both of the brothers’ schools were shut down Tuesday, as well as several other schools in the vicinity, and students were required to go back to e-learning from their homes. Everyone the brothers had contact with at their schools and hagwon are being tested for the coronavirus.

In Dong District, where the brothers live, all 34 kindergartens, 23 elementary schools and two schools for students with special needs closed either on Tuesday or Wednesday and said they will remain shut until July 10. Students in those schools will have to rely on remote learning again.

All middle and high schools in Dong District have been strongly recommended by the city’s education office to cut classroom sizes to a third of their full capacity so that students can put distance among themselves.

“There’s always a possibility that the coronavirus can be brought into schools from outside school zones,” Jung said. “We once again urge schools to abide by sanitation guidelines.”

Across the nation, 51 new Covid-19 cases were detected Tuesday, up from 43 the day before. Thirty-six patients were locally infected: 12 in Gwangju, 11 in Gyeonggi, nine in Seoul, three in Daejeon and one in Daegu, according to KCDC data. Fifteen cases were imported: eight from Kazakhstan, three from Iraq and one from each the Philippines, Uzbekistan and Kyrgyzstan. One other case was from the Americas.

Korea’s total caseload now stands at 12,850. As of Tuesday at midnight, 282 people had died, the same as the previous day, while 11,613 people had been declared fully recovered, 76 more than the day before.

In Gwangju, several cases were traced to Gwangreuk Temple and a door-to-door sales business.

Credit limits for online classes are now up to the universities