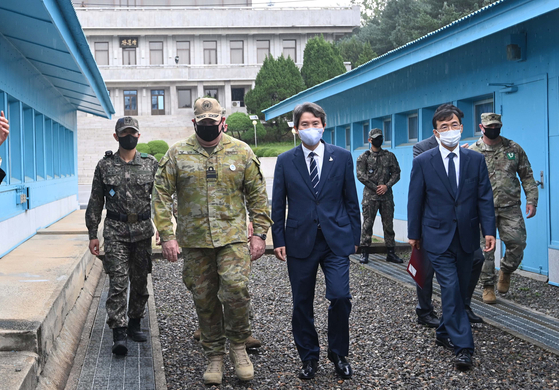 
Minister of Unification Lee In-young credited North Korea for attempting to honor an all-but-defunct inter-Korean military agreement from two years ago in his first visit to the demilitarized zone (DMZ) on Wednesday.

The visit, which came on the eve of the second anniversary of the Sept. 19 military agreement signed between the two Koreas, was meant to reinforce South Korea’s pledge to uphold peace-seeking measures enshrined in the deal, according to the ministry.


Crediting the agreement for relaxing intense tensions that almost reignited hostilities between the two countries in 2017, Lee called the military pact “worthy of high praise” for bringing about a failsafe against potential military conflict on the peninsula.


The Comprehensive Military Agreement was signed by military chiefs of the two Koreas at the third inter-Korean summit at Pyongyang in September 2018. It stipulates that both sides will halt any acts of mutual military hostility, and calls for a gradual disarmament of the heavily fortified DMZ and its neighboring waters.

But as relations faltered between the two Koreas along with the North’s denuclearization talks with Washington, Pyongyang appeared to renege on the agreement by conducting weapons tests near the border while criticizing Seoul for kowtowing to the United States.

In June, the peninsula was plunged into crisis once again after Pyongyang unilaterally demolished an inter-Korean liaison office in their border city of Kaesong — the most lasting result of the two-year rapprochement.


Lee, who was brought in by the Moon administration to salvage inter-Korean ties, said Wednesday that Seoul was continuing efforts to implement the agreement to its full.


Adjustments were made to the South’s joint military drills with the United States, while a legislative process is ongoing to resolve the issue of anti-Pyongyang leaflets, Lee said, referring to South Korean activists’ unauthorized dispatch of propaganda across the border which prompted the North’s escalating aggression in June.

Whether the destruction of the liaison office constituted a breach of the Sept. 19 agreement was a point of contention in Seoul, with Defense Minister Jeong Kyeong-doo saying the two were unrelated.

Lee noted the demolition of the office, which had been left vacant for months due to the Covid-19 pandemic, was “certainly a very regrettable act,” but added that Kim Jong-un “made an effort to prevent further escalation of tensions” with his subsequent order to suspend military action plans against South Korea.

Pyongyang dialed back its hostility with the order, promptly withdrawing loudspeakers it had set up at the DMZ that same week to blast propaganda broadcasts across to the South.

Such acts, Lee said, showed North Korea had attempted to respect the September military agreement — a rosy assessment, given how bare inter-Korean dialogue has been since June.

Rehashing his numerous earlier pledges, Lee pledged to restore ties through his signature “small-scale approach,” which he said would include humanitarian exchanges in the fields of public health or the environment once the coronavirus pandemic has subsided.

“I hope the North too responds for the sake of implementing the promise between our two leaders made in the inter-Korean joint statement,” he said.