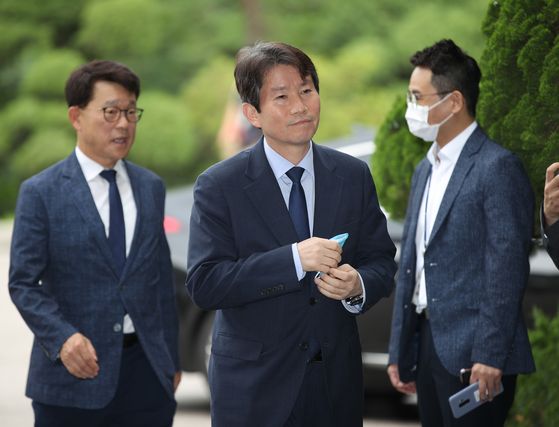 Rep. Lee In-young, center, the nominee for South Korea’s Minister of Unification, enters an inter-Korean office in northern Seoul for his first day of work on Monday. [YONHAP]


Dialogue between South and North Korea, as well as the United States, must not be cut off under any circumstances, Lee In-young, the Blue House nominee for Seoul’s Ministry of Unification, said Monday.

Lee, a four-term lawmaker tapped by South Korean President Moon Jae-in to head the country’s top inter-Korean body, told reporters he would lay the “stepping stones” for peace and reconciliation with the North as he headed to his first day of work at an inter-Korean office in Seoul.

The nominee also warned Pyongyang against any sort of action threatening to raise tensions on the peninsula, amid state media reports from the country promoting the third anniversary of the regime’s successful test of an intercontinental ballistic missile (ICBM) known as the Hwasong-14.

Lee also noted that there were actions South Korea could take on its own to improve ties with the North independent of Seoul’s so-called working group with Washington. The working group is a consultative body launched by the allies in 2018 to ensure they remained on the same page regarding North Korea policy.

Pyongyang has objected intensely to Seoul’s reliance on the working group, calling it a sign of South Korea’s subservience to the United States. Lee’s remarks suggest the South could work to decouple some of its initiatives from the body in the pursuit of a “creative” approach that its top officials have raised as a means to ameliorate ties with the North.

In terms of "stepping stones," Lee said he supports the restoration of inter-Korean communications, humanitarian exchanges and cooperation as well as implementation of past inter-Korean agreements signed at the three summits in 2018.

Moon’s decision to pick Lee, a tenured politician who, until earlier this year served as the floor leader of the ruling Democratic Party (DP), to helm the Unification Ministry signaled the administration’s hope to breathe new life into its signature inter-Korean policy, which is in the throes of its greatest crisis after the North escalated its aggression toward the South last month.

The nominee also highlighted his credentials as a politician, hinting he would help drum up legislative support for the administration’s inter-Korean drive while seeking an understanding from the conservative opposition, which has been fiercely critical of the Moon government’s dealings with the North.

Along with Lee, Moon also overhauled his national security and North Korea affairs team at the presidential office, naming Suh Hoon, current chief of the National Intelligence Service (NIS), as the new director of the National Security Office at the Blue House.

Chung Eui-yong, the outgoing head of the Blue House’s National Security Office, was made a special advisor to the president, along with Im Jong-seok, Moon’s former presidential chief of staff.

All three figures began work at the Blue House on Monday after their formal appointment by Moon, the presidential office said.

Moon also tapped former Rep. Park Jie-won — an experienced veteran of inter-Korean affairs — to replace Suh as NIS chief, a surprise personnel choice that further underscored the president’s intent to double down on North Korea during his remaining term.

Park and Lee will be required to undergo parliamentary hearings over the next few days that are expected to draw a cannonade of attacks from the opposition.