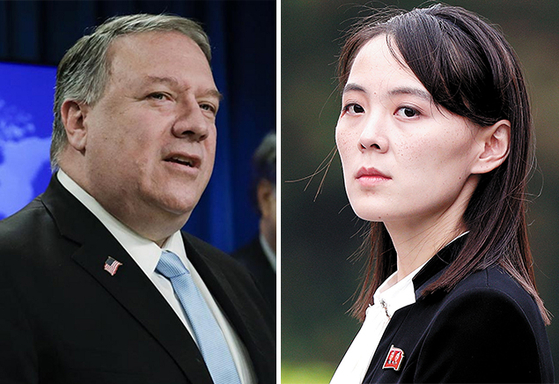 
The United States proposed talks with North Korea to discuss humanitarian assistance in the wake of Covid-19, according to a diplomatic source.

The source, familiar with bilateral negotiations between the United States and North Korea, told the JoongAng Ilbo Wednesday talks had been proposed through the so-called New York diplomatic channel at the United Nations in New York.

“North Korea has yet to give a substantive answer, but contact is continuing,” the source said.

The information jibes with remarks on Tuesday from U.S. Secretary of State Mike Pompeo, who hinted talks were ongoing between the two countries in spite of lackluster progress in denuclearization negotiations over the past two years.

"It's gone quiet publicly, but there's still lots of work going on […] and even efforts with the North Koreans to come to understand where there may be opportunity as time goes on," Pompeo said in an online seminar.

On Sept. 9, Pompeo said on Fox News he hoped to extend humanitarian aid to North Korea amid its economic difficulties and the threat from Covid-19. U.S. President Donald Trump also remarked in an interview on Sept. 7 he was open to meet North Korean leader Kim Jong-un again if the latter was willing.

Such activity feeds speculation that the Trump administration is angling for a high profile diplomatic event with Pyongyang — possibly involving Pompeo and Kim Yo-jong, Kim Jong-un’s younger sister to whom he has reportedly entrusted direction of foreign policy.

According to South Korean and U.S. intelligence, Kim Yo-jong is continuing to take an active role in governance in addition to her delegated authority over relations with Washington, testified by her visit to typhoon-hit areas in the country on Sunday.

The younger Kim, intelligence sources said, made a visit independent of her brother’s stops in towns devastated by floods and typhoons in North Hwanghae Province on Saturday and Monday.

North Korea is currently facing its biggest economic crisis since the mid-1990s amid Covid-19 and serial natural disasters, with three typhoons and one of the longest rainy seasons on record this summer.

The storms and the devastation they wrought on the country’s food producing and other areas — including a key rare-earth mining area in South Hamgyong Province — forced a drastic alteration of economic plans this year, with Kim Jong-un ordering the regime’s attention be directed towards recovery efforts.

It is unclear whether Pyongyang is willing to accept international aid given the emphasis it has placed on autarky after its nuclear talks with Washington became stuck in a stalemate.

In a high-profile ruling Workers’ Party Political Bureau meeting on Aug. 13, Kim ordered the country to reject all external help with regards to Covid-19 or flood damage, insisting the North will surmount its current crises through its own self-reliant means.

Pyongyang has since rebuffed aid offers from international relief groups as well as South Korea, though it is believed that it continues to receive help from its traditional ally in China.

A number of diplomatic sources said this self-imposed isolation may be part of Pyongyang’s larger strategy to hedge its bets with regards to Trump’s re-election chances in the U.S. presidential election in November.

In July, Kim Yo-jong released a statement rejecting the possibility of another summit with the United States this year, noting the regime was preparing for how to deal with not only Trump but also a succeeding presidential administration in Washington.

“Chairman Kim may be buying time with his slogan of self-reliance, but he is really holding out for the next U.S. administration to maintain an openness to dialogue and denuclearization negotiations,” said Cho Seong-ryoul, a senior advisor at South Korea’s Institute for National Security Strategy.

“A third summit before the election is unlikely, but First Vice Department Director Kim Yo-jong could meet Secretary of State Pompeo around October.”