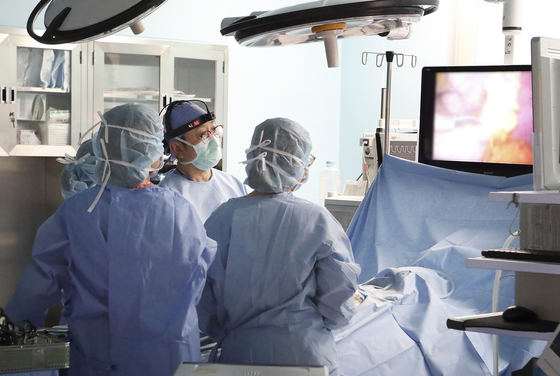 
The Covid-19 pandemic left hospitals around the world grappling with the need to treat patients while avoiding infection, both of medical staff and other people. One solution was "telehealth" — the practice of offering remote access to health care services online.

Digital healthcare, which includes telehealth, start-ups in the United States attracted $5.4 billion of investment in the year’s first half, a new record. China and Japan saw telehealth users surge after the spread of Covid-19. China permitted telehealth services between doctors and patients in 2014, while Japan did so in 2015.

Korea doesn't have the same telehealth history. Despite discussions having started two decades ago, domestic law does not allow medical services to be handled remotely between doctors and patients. Regulations on DNA testing and medical data usage are also obstacles to the development of digital healthcare start-ups in Korea.

“There’s a score of Korean companies with advanced technology that are doing business overseas due to regulatory restrictions on telehealth,” said an April report from the Federation of Korean Industries (FKI).

Neofect, for example, is a manufacturer of smart gloves used in rehabilitating hand injuries. The glove is sold in more than 30 countries worldwide, but isn’t allowed in Korea because it is monitored by healthcare professionals remotely, making it technically telehealth.

Another prominent telehealth company in Japan is Naver’s subsidiary, Line. The portal site also does not run its medical services in Korea.

So the issue clearly isn’t technology. In fact, Korean hospitals may be some of the most digitized in the world when it comes to data. According to a 2018 study by the Ministry of Science and ICT, 92 percent of local patients have electronic medical records, higher than Europe’s 84 percent and the United States’ 60 percent.

Another major obstacle limiting the development of telehealth is the strong opposition from local doctors.

In late February, the government granted a temporary easing of regulations to allow doctors to consult and prescribe medicine over the phone, as long as doctors approved that doing so would not cause health risks.

The Korean Medical Association (KMA) immediately fired back, saying its doctors would refuse to take part in a practice that it claimed would reduce the accuracy and efficiency of patient diagnosis and treatment. Opposition to the government’s drive to develop telehealth was even one of the reasons for the recent doctors' strike.

“Telehealth can mean so many things according to how the blanks are filled in: Who would offer what service, when, to whom and in what way. The impact and scope of telehealth greatly differs accordingly and if discussions are not built upon a consensus of what telehealth would look like, progress is difficult,” he said.

“Without solving the fundamental problems in Korea’s medical system or coming up with a more concrete idea, merely allowing telehealth to happen will just spur a bunch of side effects.”

One of these “fundamental issues” is the local system where patients, even those with light symptoms, are allowed to go directly to large-sized hospitals without first going to a local doctor, leaving local clinics competing with bigger institutions.

If telehealth is allowed in such circumstances, the system could take more business away from local doctors that are already competing with larger institutions.

Overseas, diagnosis of minor symptoms, observation of an illnesses progressing and fields like psychiatry and dermatology that require regular appointments benefit hugely from telehealth services.