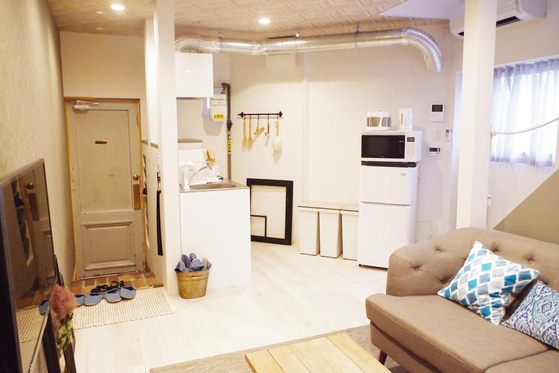 A photo of a property of Japan's Sekai Hotel, which remodels empty houses for rent. [BOOKING.COM]


An Airbnb knockoff is to be allowed under a program in which the government looks for compromises between established industries and disruptive models.

House and apartment-sharing services are illegal in Korea for locals under most circumstances.

The government established the “Hangeoleum model,” which translates to one "step at a time," on June 4. Under it, the authorities mediate disputes between the newcomers and the old guard.

Three projects have been targeted: the sharing of city lodging, a monorail project in Hadong County, South Gyeongsang, and the renting of empty houses in farming and fishing villages.

Finance Minister Hong Nam-ki on Monday said an agreement between a new businesses and the existing lodging industry has been reached where both would benefit.

“More specifically, the new business has agreed on conditions that were restrictive compared to their business proposal while agreeing to work with the local residents, including the provision of funding that will be used for the local villages,” Hong said during a government meeting on innovative growth strategy.

According to the government, Dazayo has been approved to rent 50 houses that have been empty for 300 business days in a year. Part of the revenue earned from the renting of the houses will be used for local community development.

The business model of Dazayo, which was founded in 2015, is to remodel empty houses in the farming and fishing villages in exchange for a free 10-year lease. The remodeled houses are then rented to consumers, much like Airbnb.

Dazayo faced strong opposition from the local minbak (guest house) operators, who were threatened by the emergence of Dazayo.

Minbak businesses, which have become one of the key income sources for farming and fishing villages, have been increasing in number gradually. In 2010, there were only 18,858 units.

Dazayo was forced to stop in July last year for violating the regulations which require the operator of a minbak in a farming or fishing village to reside in the same building as the accommodation.

Finance Minister Hong added that the government has come up with measures that would improve safety as well as stepping up the competitiveness of minbak businesses in the rural areas.

“We have set aside 2.5 billion won in next year’s budget for safety education and consulting support” for minbak, Finance Minister Hong said.

“There has been a conflict between existing minbak businesses and new businesses as [the new business models] went against the agriculture and fishing village minbak regulations, which were supposed to increase the income of farmers and fishermen,” Hong said. “With each taking a step back, we were able to reach an agreement where both parties could benefit.”

These houses, which have been vacant for at least 1 year, account for 1.5 percent of the 3.9 million housing units in the rural areas.

The government also said it has decided to create a supercomputing center and research data center for the agriculture bio sector.