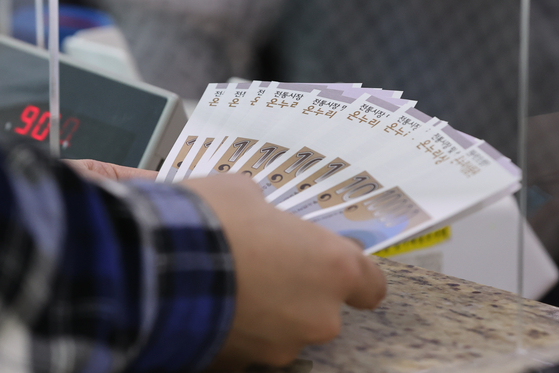 A customer buys Onnuri gift coupons, which can be used to buy products at traditional markets, from a post office in central Seoul on Monday. During Chuseok, the gift coupons are given as gifts. [YONHAP]


The Financial Services Commission (FSC) on Monday said any debt that matures during the Chuseok holidays, including credit card payments, will be postponed until the holiday's end on Oct. 5.

The move is to ease the financial concerns of people so they can enjoy one of the most celebrated holidays of the year.

According to the FSC on Monday, any payments will be suspended until Oct. 5 without penalties or interest.

It is also possible to make early payments up to Sept. 29, the day before the start of the Chuseok holidays. Any commission fees for early repayment of debt that matures during the holidays will also be waived.

Other payments such as retirement pensions and housing pensions will be given to recipients before Sept. 29.

In order to pocket profits from stock investments, investors would have to sell their shares no later than Sept. 27 as it takes two days of processing. If shares are sold on Sept. 28, that payment will be made after the holidays on Oct. 5.

The financial authority also laid out several measures for small- and medium-sized businesses worth 16.5 trillion won ($14.2 billion) via state-owned financial companies with low interest. The special loan and guarantee program will be offered until Oct. 19.

A total of 4.6 trillion won of fresh loans will be lent to businesses as working capital. The Industrial Bank of Korea (IBK) will contribute 3 trillion won, with a maximum 300 million won per company. The Korea Development Bank (KDB) will cover the rest.