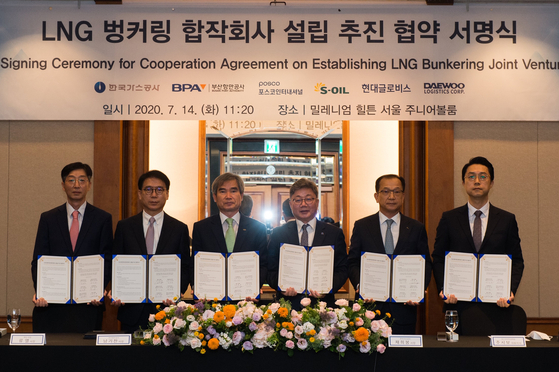 Officials from Kogas and its five partner organizations signed the documents to create a new joint LNG bunkering venture on July 14. [KOGAS]

“As a part of our eco-friendly business expansion plan, Korea Gas Corporation (Kogas) will push forward to promote liquefied natural gas (LNG) bunkering with 37 years of experience in the natural gas industry,” said Chae Hee-bong, Kogas president, in a commemorative speech to mark the 37th anniversary of the launch of the corporation in August.

LNG bunkering is the procedure of providing liquefied natural gas to a ship for its own use, rather than as cargo. In comparison to traditional fuel, LNG emits 100 percent less sulfur oxide and dust, 15 to 80 percent less nitrogen oxide, 20 percent less carbon dioxide and 99 percent less fine dust, making it the ideal green fuel.

International pacts and restrictions are what prompted Kogas to venture into the LNG bunkering industry. International Maritime Organization’s IMO 2020 regulation mandates a maximum sulfur content of 0.5 percent in marine fuels globally, down from the previous 3.5 percent. North America and European restrictions will force it to be lower than 0.1 percent.