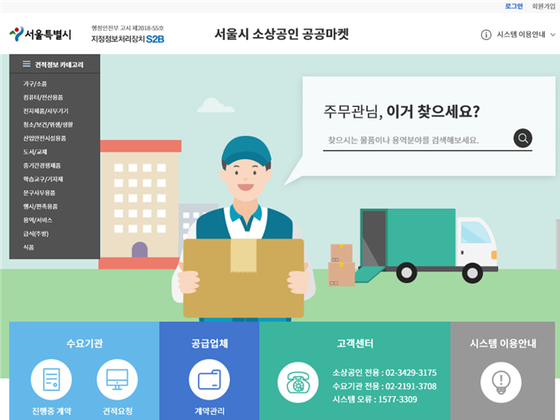 The main page of an online shopping mall that was opened Monday by the Seoul Metropolitan Government, which allows small-business owners to sell their goods to public institutes. [SEOUL METROPOLITAN GOVERNMENT]

The Seoul Metropolitan Government opened an online shopping mall Monday where small businesses can sell products to public institutes in the capital, as part of efforts to help struggling entrepreneurs amid the coronavirus pandemic.

Through the initiative, the Seoul government office said it hopes to boost transactions between both sides nearly five-fold annually, from the current 200 billion won ($172 million) to 1 trillion won.

The online platform, dubbed the “Seoul small-business owners public market” (seoul.s2b.kr), will allow Seoul’s 25 district offices, welfare centers, schools and other public institutes to easily look for items on the website rather than scouring the internet for a provider every time they need to buy something, the city said.

The Seoul government said an advanced search engine on the website also allows potential buyers to browse for products, compare them with other small businesses and also look for companies that are located in a particular district or hire workers with disabilities.

According to the Seoul city government, public institutes in Seoul purchase about 9 trillion won worth of goods in a year, including office supplies, stationery, computers and other equipment. Of that, about 200 billion won is spent on small businesses.

Seo Seong-man, an official overseeing labor and livelihood security policy at the Seoul Metropolitan Government, said the city looks forward to reviving the local economy with the new website.

The city “hopes [the online platform] helps small-business owners who are in distress due to the Covid-19 [pandemic] find new routes to sell their goods to public institutes,” Seo said in a statement. The city “also wishes [the website] will increase transparency in public institutes’ budget” spending, the official continued.

A call center will be set up to handle inquiries regarding the website, while a separate team of 50 consultants will help small-business owners get involved and sell their products on the platform, the city continued.

Apart from the online shopping mall, the city said it would also slash monthly rent by half from September through December for some 10,183 stores doing business in shopping areas owned by the Seoul Metropolitan Government, such as underground shops beside subway stations. All together, nearly 29.4 billion won will be exempted.