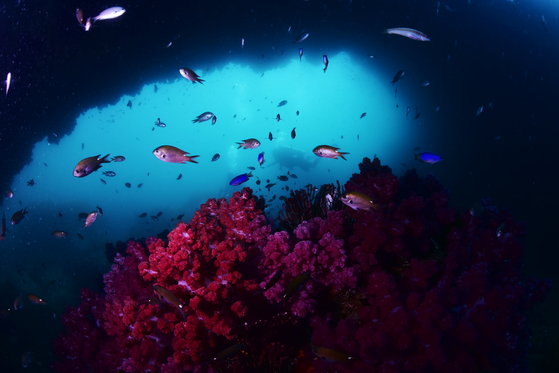 Coral colonies are increasingly found in the waters off the coast of Jeju Island near Munseom, a popular diving spot. Jeju waters have seen a rise in temperatures, with native fish and algae being replaced by subtropical species. [LEE SEON-MYEONG]

Global warming appears to be taking a toll on the ecosystems of Korea's seas, with tropical fish and colorful corals appearing in Jeju waters and replacing the native conch, abalone and brown algae.

Longtime divers say that starting about 15 years ago, coral reefs and sea anemone — typically seen in subtropical waters — started appearing in the waters off the coast of Korea’s southern Jeju Island.

“Just 30 years ago, the minimum water temperature dropped to 13 degrees Celsius [55 degrees Fahrenheit],” said Kim Byung-il, a Jeju diver of 34 years. “But so far this year, it only dropped to 15 degrees. A two-degree rise is a big difference [in terms of water temperature.] On land, that would amount to a difference of around 20 degrees.”

The JoongAng Ilbo visited Munseom, an island off the coast of Seogwipo Port that has become a popular scuba diving spot, on Aug. 13 as part of the newspaper’s 55th anniversary series on climate change.

The reporting team saw with their own eyes the changes in the ecosystem of the Jeju waters.

Once divers pass through the kelp forest, vital food for fish, they are greeted by brilliant soft coral and towering sea anemones.

“You couldn’t see spinose giant sea anemones just 30 years ago, but they began spreading rapidly starting from 15 years ago,” said Kim. “They grow up to 50 centimeters [20 inches] annually, and there are now tens of thousands of polyps in this area.” 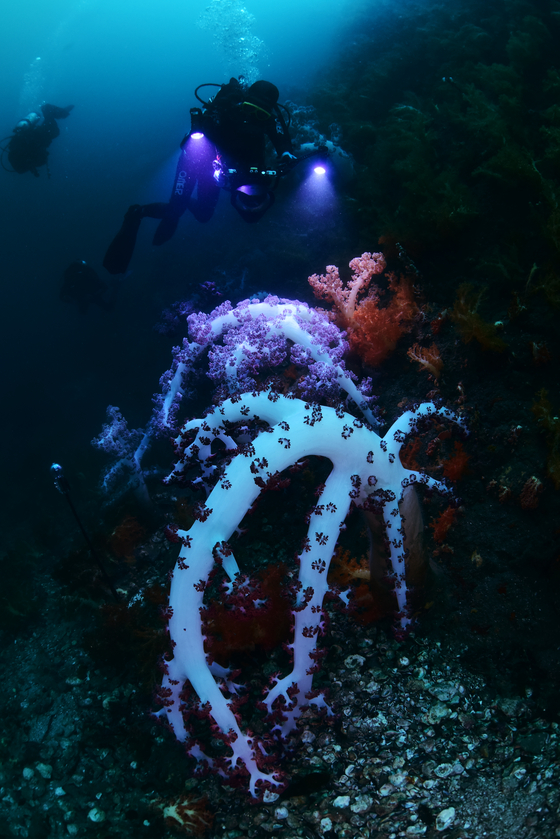 The rapid change in Jeju's underwater ecosystem comes as water temperatures in the seas off Korea’s southern coast rose 1.5 degrees Celsius over the past 50 years, according to experts, which is three times the global average.

“Fish that can only be spotted in tropical seas have begun appearing and the native fish are disappearing," said Lee Seon-myeong, an underwater photographer with 50 years of diving experience.


In another diving spot a 10-minute boat ride from Munseom, the seascape has drastically changed.

“With the rise in water temperatures, the diversity of species has dropped markedly,” Kim said. “In the past, there was a lot of gulfweed and brown algae, which served as hideouts and spawning grounds for many fish. But brown algae has disappeared and been replaced by hard corals.”

According to a long-term study of the marine ecosystem in Munseom waters conducted by the Ministry of Oceans and Fisheries, the concentration of Ecklonia cava, a species of brown algae, measured at depths between 10 and 15 meters (33 to 49 feet), dropped from 67.5 percent in 2002 to 4.2 percent in 2015.

Meanwhile, the concentration of soft coral increased from 2.5 percent to 12.7 percent during the same period, according to the study, led by Park Sang-yul of Jeju National University and Lee Hyuk-je of Sangji University.

“In the past, typhoons only affected water levels above five meters, but recently, the strength has increased and they affect water levels up to 15 meters. Consequently, soft coral are growing in spots where the brown algae have drifted away, and spots for algae habitation is decreasing,” Park said. 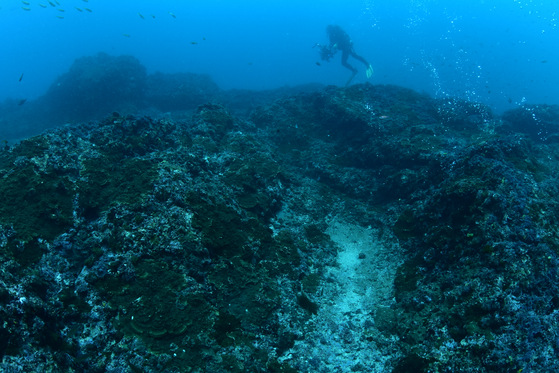 With the disappearance of marine forests, conch, abalone and other native shellfish that feed of algae are also diminishing.

In turn, haenyeo, the indigenous female divers of Jeju who are on Unesco’s list of Intangible Cultural Heritage, wonder how many of them will be able to continue their livelihoods in the next decade.

A group of haenyeo were catching sea snails off the coast of Gapa Island, some 10 minutes by boat from Unjin Port in Seogwipo. After one hour, they could barely fill half their basket.

“A change as sharp as falling off a precipice has happened in Jeju waters in the past decade,” said Kim Yeong-nam, a 30-year veteran haenyeo. “I think the number of Jeju haenyeo will shrink to half within 15 years.”

Park added that the impacts changing seas will likely be felt more broadly.

“There have to be preparations made for climate change to prevent a collapse in the fishing village economy,” he said.