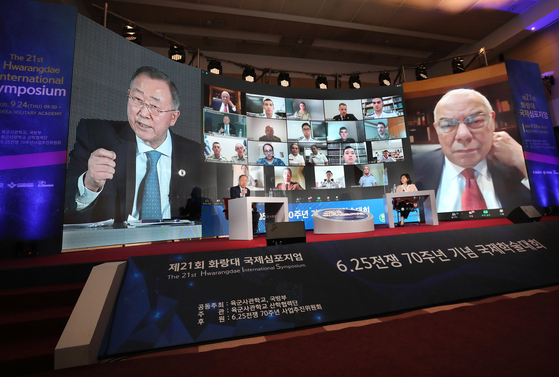 Colin Powell, a former U.S. secretary of state during the George W. Bush administration, on the right screen, and former United Nations Secretary General Ban Ki-moon, on the left screen, talk about the 1950-53 Korean War and the future of the Korean Peninsula during a virtual military forum held Thursday at the Korea Military Academy (KMA) in Nowon District, northern Seoul. [PARK SANG-MOON]

Former U.S. Secretary of State Colin Powell said Thursday during a virtual military forum that South Korea and the United States should not be terrified of the North, saying that whenever he sees a photo of Pyongyang test-firing a missile on television, he “kind of smile[s] at it.”

The retired four-star general said Pyongyang would be committing “suicide” if it ever fires a missile at the United States — and “disappear” the next morning, which is why he doesn’t think the North would actually fire.

Another reason that the North wouldn’t fire, he continued, is China.

The “Chinese are not going to let this little country start another war in Northeast Asia,” he said, adding, “And so I’m confident that the Chinese would play a role in making sure that North Korea would not take aggressive actions that would result in a war in the region.”

Powell, who served as the top U.S. diplomat during the George W. Bush administration, relayed the remarks during a virtual military forum co-hosted by South Korea’s Ministry of National Defense, the 70th Anniversary of the Korean War Commemoration Office at the Ministry of Patriots and Veterans Affairs and the Korea Military Academy (KMA).

The Hwarangdae International Symposium, normally held each year at the KMA’s campus in Nowon District, northern Seoul, was held virtually this time due to the coronavirus pandemic.

In commemoration of the 70th anniversary of the outbreak of the 1950-53 Korean War, Powell was invited to speak at the first session of the forum Thursday alongside former United Nations Secretary General Ban Ki-moon about the devastating war, and the future that lies ahead for the peninsula.

Ban and a small crowd of cadets and military officials gathered at a makeshift studio on the KMA campus while complying with social distancing rules, as Powell attended virtually from abroad.

Looking back at his years serving as the chairman of the U.S. Joint Chiefs of Staff (JCS) from 1989 to 1993, Powell stressed the power of diplomacy and negotiation over military options, saying talking to others was more useful than putting them on notice that they’re in danger of being attacked.

“But I didn’t use that very much. I found it more useful to sit down with somebody and say, ‘How are you? Let’s talk about things,’ and try to persuade them that there’s a better life for their country if they start to follow the right rules — economic rules, rules of democracy.”

Powell also noted he would not vote for U.S. President Donald Trump again in November, criticizing him for “moving away from all inter-agency, international organizations” and “taking some shots at South Korea because they’re not spending enough” for the hosting of American troops in the country.

“I think that’s all trivial and irrelevant compared to what South Korea does with that part of the world and keep it stable, but more importantly, what it has done for its own people,” he said. 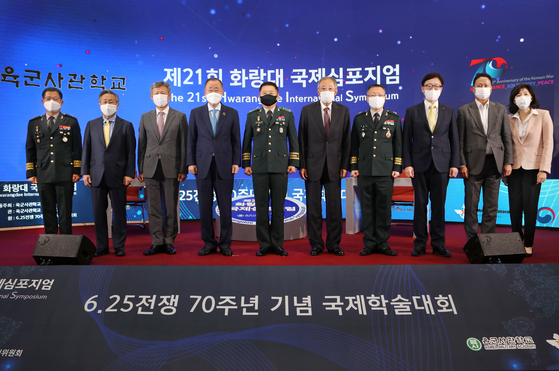 
Ban denounced North Korea’s missile and nuclear weapons development program, saying it was up to political leaders to prevent another military conflict from unfolding between the two Koreas.

“We need reconciliation. We need dialogue,” the former UN chief said. “I think our brothers and sisters and partners in North Korea should be more realistic. They should understand where and what kind of world they’re living in. We’re living in the 21st century, where in principle, everybody should live in peace and in prosperity with full human dignity, and human rights should be respected.”