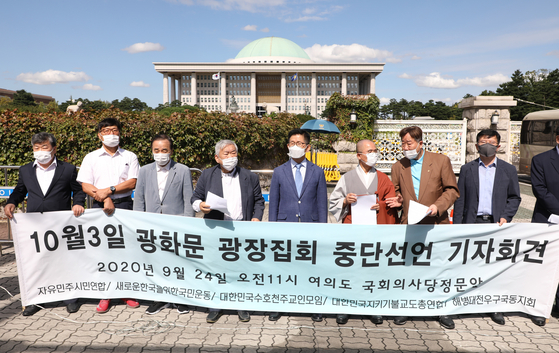 Leaders of conservative groups hold a press conference in front of the National Assembly on Thursday, saying they will not hold massive antigovernment rallies on National Foundation Day on Oct. 3. Instead, they announced a plan to hold a drive-thru rally. [YONHAP]


Leading conservative activist groups on Thursday said they will alter their plans for a massive antigovernment protest in downtown Seoul, and instead hold a drive-thru rally to avoid potential blame for subsequent coronavirus infections.

A group of well-known conservative activists, including former Gyeonggi Gov. Kim Moon-soo and Pastor Suh Kyung-suk, held a press conference on Thursday to announce the change. The conservatives earlier had vowed to organize a rally near Gwanghwamun in central Seoul on National Foundation Day on Oct. 3, despite the government ban.

"We will not hold a street gathering on Oct. 3 near Gwanghwamun," the civic group said in a statement. "We urge other right-wing groups to join our position."

By law, it's illegal to rally in large numbers in Seoul under the Seoul Metropolitan Government's ban on any congregations involving 10 or more people through Oct. 11. Police warned they would arrest anyone who participates in rallies exceeding that limit.

"No matter how serious the Covid-19 outbreak is, we must still express our rage toward the Moon Jae-in administration's evil deeds and faults," the statement said. "We believe holding a car parade is the only way to express our voices without falling into the trap of the government."

Earlier this month, Suh's group applied for permission to hold a drive-thru rally on Oct. 3 in central Seoul. Suh said over 200 cars will march from Yeouido, western Seoul, to Seocho Police Station through Gwanghwamun from 1 to 5 p.m.

"Because the authorities banned drive-thru rallies with more than 10 cars, we will march in groups of nine cars," Kim said.

Some activists maintained that they will hold rallies as planned, dismissing the drive-thru protest plan. The group, which includes the controversial Rev. Jun Kwang-hoon, who was the one of organizers of the Aug. 15 Liberation Day rally, and his followers of the Sarang Jeil Church has been blamed for the resurgence of infections. 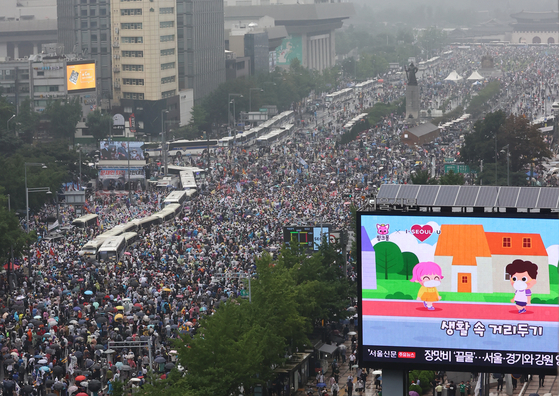 Streets of central Seoul near Gwanghwamun are filled with antigovernment protesters on Aug. 15, 2020. [YONHAP]


The group said it will invite more than 1,000 people to the Oct. 3 rally. Choi In-sik, a leader of the group, told local media on Thursday, that he will file a lawsuit with a local administrative court to challenge the government ban.

According to the police, it received 835 applications to hold rallies in downtown Seoul on National Foundation Day. The police said they rejected 112 plans including many events that planned to invite more than 10.

Prime Minister Chung Sye-kyun said Thursday that the government will enforce its ban on drive-through rallies.

In a meeting with senior members of the ruling Democratic Party (DP), government and the Blue House, Chung said no rallies will be allowed on the National Foundation Day.

"Some people said they want to hold rallies at the Gwanghwamun," Chung said. "They are also precious citizens of our country, but the government has made clear that no rallies on the National Foundation Day will be allowed near Gwanghwamun. No matter what their reasons are, and no matter what methods they will use, we won't allow Gwanghwamun rallies."

"Anyone who does not respect the law will be held accountable," he said.

Politicians are split on the idea of drive-thru rallies.

Rep. Joo Ho-young, floor leader of the conservative opposition People Power Party (PPP), said Wednesday that the activists have the right to hold drive-thru rallies as long as they don't disturb traffic and violate disease control measures.
Gyeonggi Gov. Lee Jae-myung, an influential ruling party politician, also said freedom of expression, if it does not harm the disease control measures, must be allowed. His position notably differed from many DP politicians' strong condemnations toward the conservative groups' plan to hold drive-thru rallies.

"There can be many ways to hold rallies," Lee said in his interview with CBS Radio. "If the methods minimized the risk of infections, there is no need to limit freedom of expression," he said.

Some conservative politicians have expressed concerns that they will face yet more public blame. The PPP has repeatedly stressed that it will not take part in the Liberation Day rallies. Its acting leader, Kim Chong-in, asked the party members to refrain from attending the events.

Don't stop and smell the blossoms