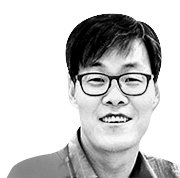 Kim Ki-chan
The author is a writer on labor and employment affairs at JoongAng Ilbo.


Coupang is a cypher. Who owns it and how it is governed remain shrouded. It often clashes with vendors. It has never reported an annual profit. Yet it has not been contained in its attempt to dominate the Korean e-commerce market. It came into the limelight when it attracted $2 billion from Masayoshi Son’s SoftBank. There are rumors that it will soon use up its investment capital. Yet it does not release a visionary outline to improve its management.

Coupang’s name came up in a meeting held at the Blue House on Sept. 17 when couriers and deliverymen warned of going on strike. Their rigorous work condition became a topic. Moon Sung-hyun, chair of the Economic, Social and Labor Council, pointed to Coupang as a model to solve the problems of deliverymen.

At Coupang, deliverymen are on the permanent payroll system while other e-commerce companies outsource logistics and delivery. Coupang’s vehicles are supplied by the company. Coupang also covers its deliverymen’s tuitions and childcare costs. They work fewer than 50 hours a week. Even with all its red ink, the company has 20 billion won ($1.7 million) reserved for employees’ welfare.

Former Labor Minister Lee Ki-kwon said, “The coronavirus outbreak has expanded the non-contact business realm and accelerated the fourth industrial revolution wave. The economy as well as the labor market could lose vitality if we do not ride the wave. The services sector can most benefit from the transition. We must find a breakthrough for jobs in the sector. We should study the case of Coupang as a model in providing sustainable and symbiotic jobs.”

Following the Coupang model won’t be easy. But the model is gradually catching on. There has been staffing for distribution — a task that used to be the deliveryman’s work — in other distribution companies. The National Post Service also has beefed up its courier and delivery manpower.

Coupang technically falls in the zombie category as it has not been able to earn enough to pay interest on its debt for the last three years. Still, Coupang carries on with its radical management and labor program. Some call it innovative. Investment in billions from a global venture capitalist like Masayoshi Son suggests a promising future. Son could have identified the future of companies from the ways of Coupang. A money-losing company seeks a new management model to carve an unchartered path.

Such aggressive features are hard to find among delinquent companies. 18 out of 100 companies in Korea fall into the zombie or marginal category. That ratio is higher than the average 12.4 percent for the Organization for Economic Cooperation and Development (OECD) and is fifth-highest in the OECD. Zombification is most serious in the services sector. The share of near-zombie companies is 38.1 percent, second highest among OECD after Turkey. Yoo Hwan-ik, head of corporate policy at the Federation of Korean Industries (FKI), points to regulations as the reason for companies failing to shake out their comatose condition. If regulations are removed, struggling companies would have more opportunities to find breakthroughs, he said.

Yet regulations are only piling up. The government and ruling party are brilliant at making new regulations, including a bill that proposes to ban the opening of shopping centers and malls across the nation. Another bill requires companies to get approval from their employee representative to launch early retirement programs. They do not care if shopping centers or malls help the regional economy. The Services Advance Act designed to promote the services sector has been gathering dust for nine years.

Social distancing measures have been implemented for more than a month. I suggest politicians and the government keep their hands off so that the market can build resilience on its own.

No absolute good on earth