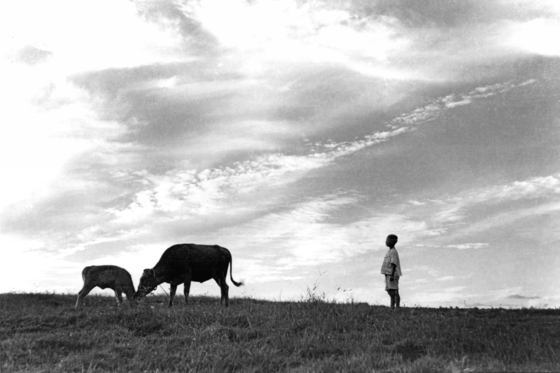 A photo by documentary photographer Lim In-sik, whose works are on display at the exhibit "Life Goes On" at Leica store in Cheongdam-dong, southern Seoul. [LIM IN-SIK]


A photographer family of three generations has continued to record the same spots in Seoul as the cityscape changes over time. Late documentary photographer Lim In-sik (1920-1998), his son Lim Chung-eui and grandson Lim Jun-young are the photographers in question.

The second- and third-generation photographers shared their memories of their father and grandfather with JoongAng Ilbo, in time for the ongoing photo exhibition "Life Goes On" at Leica store in Cheongdam-dong, southern Seoul, which runs through Oct. 4. In the exhibit, visitors can take a look at what Seoul looked like in the 1950s through pictures taken by Lim In-sik.

The late Lim took black-and-white photos of central Seoul's Myeong-dong, Jongno, Samcheong-dong as well as Gahoe-dong where his house used to be to show the lives of people after the Korean War.

Some photos show views from above which Lim achieved by getting in a small airplane. He showed great interest in cameras and photos from his early 20s, and started to take more photos after he moved to Seoul from North Pyongan Province in North Korea in 1944.

Since his studio was in Yongsan District while he lived in Gahoe-dong, he was able to photograph many historic events like the day Korea was liberated from Japanese colonial rule in 1945 when the Japanese left the Yongsan station, as well as the event to announce the establishment of Korea in 1948.

He also provided such photos to major media outlets overseas including AP. His older brother Lim Seok-je was also a documentary photographer. 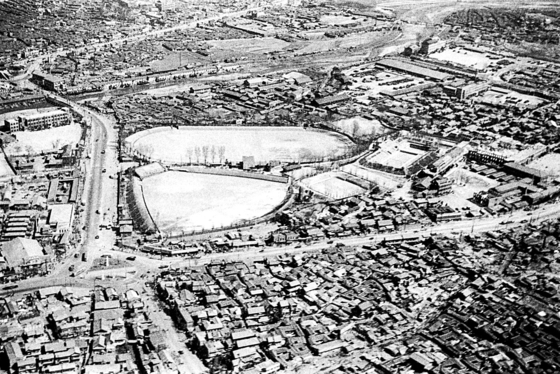 The area around Dongdaemun Stadium in 1954, which is now Dongdaemun Design Plaza. [LIM IN-SIK]


Photos of Dongdaemun Stadium taken by the grandfather, father and again by the son to show how the area has changed act as rare records. The grandson, June-young, held a photo exhibition titled “The Big Flow” to show the works of all four photographers in the family in 2016.

The son and the grandson are particularly proud of their family creating records of how Korea has changed in pictures.

“Since when I was younger, I did work a lot in the dark room to help my father, and I couldn’t help but naturally get comfortable with photo-taking,” said the son, Chung-eui.

“However my father was really against the idea of me becoming a photographer. Basically it was an occupation with which you can’t make much money." 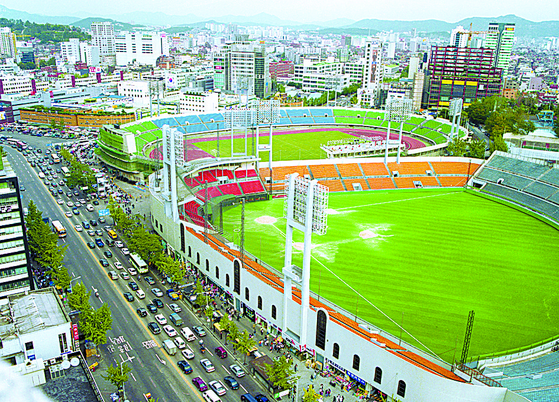 
Yet Chung-eui, as if it was meant to be, chose to follow in the footsteps of his family before him. He started his career as media photographer at the Korea Herald in 1973 where he worked for two years. After he left the company, he really geared up to be a photographer who specialized in taking pictures of architecture as he met architect Kim Swoo-geun. With the Asian Games in 1986 and the Seoul Olympics in 1988 changing the landscape of Seoul so much, Lim took detailed photos of all the updates the city was undergoing at the time.

He also took photos of less-changed areas in Geumho-dong, central Seoul, which was known as a less-privileged neighborhood at that time, to show the contrast between neighborhoods in Seoul. He continued to take photos of architectural subjects for over 50 years and just recently started to focus more on morning scenes across Korea, in which nature harmonizes with man-made buildings.

“I chose to live a life of a photographer against my father’s advice, yet I did the same when my son decided to do what I did,” said Lim Chung-eui.

“I have done it for all my life, and I know that the path isn’t easy, so how can I be [supportive] of what my son says?" 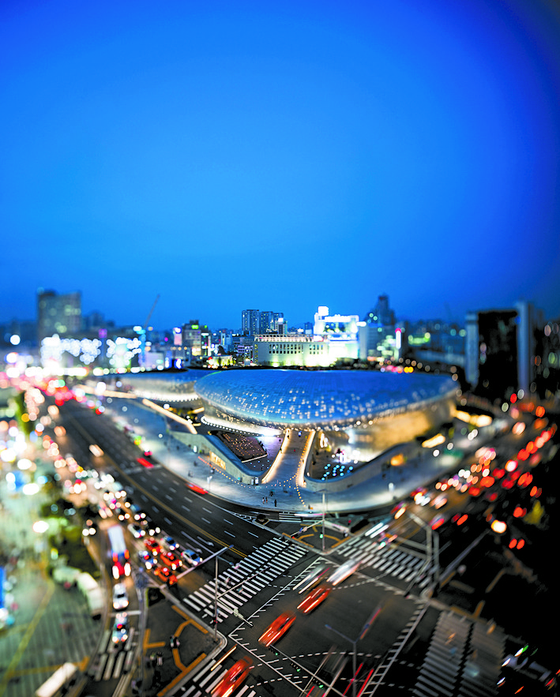 A photo by Lim June-young of Dongdaemun Design Plaza, which was built on the site where Dongdaemun Stadium used to be. [LIM JUNE-YOUNG]


But just like the father didn’t follow the words of the grandfather, the grandson June-young also chose not to heed his own father's advice. He even left for the United States to study photography at the School of Visual Arts in New York. He started what is now his major work, the “Like Water” series, in which he expresses the energy from people in the city bursting out of buildings as they leave work in the evenings.

What he learned was the power of photographs that are taken to record the history.

“Even for a restaurant to be handed down over three generations, it just has to accept the new changes as a more modern system, and its flavor profiles should follow as the generations change,” said Lim June-young. 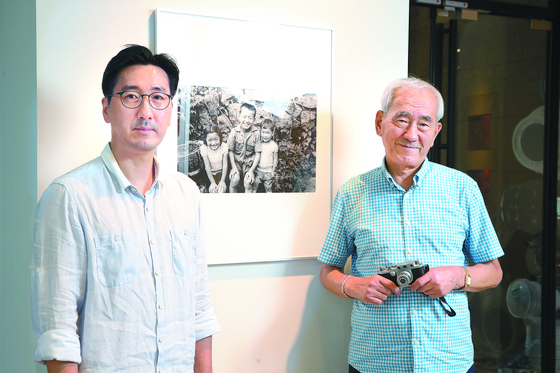 Lim June-young, left, and his father Lim Chung-eui pose at Leica store in Cheongdam-dong, southern Seoul, where the photo exhibition of their grandfather and father Lim In-sik and June-young, is being held until Oct. 4. [WOO SANG-JO]


“I’m following what others in my family have done, but I’m trying to make it happen in my own style, not the old way."

The father and son share the same worries. The archive of photos taken by the senior Lim and his older brother. The quantity of film of their work is an unthinkable amount.

“We Koreans were busy getting the new things set up and were lax about getting rid of old things,” said June-young. “Since the past is what connects the present to the future, I want to hand down the photos to the next generation."