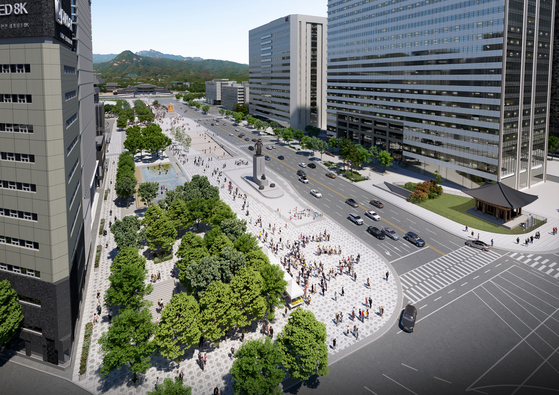 A sketch of the new design for Gwanghwamun Square. [SEOUL METROPOLITAN GOVERNMENT]


Construction on Gwanghwamun Square will commence next month as the Seoul city government tries to turn it into something more like a park and less like a traffic island.

“The roads on the east side of the square will be changed in a stage-by-stage manner so as to incur the least possible traffic difficulties,” the Seoul Metropolitan Government said in a statement Sunday. “The construction will start at the end of October.”

The city government’s plan to revamp the square was first announced in 2018. It involved expanding the square westward and incorporating the southbound roads between the square and the Sejong Center for the Performing Arts, and rerouting the roads in front of Gyeongbok Palace to incorporate that area into the square as well.

Some experts warned of traffic nightmares and the public opposed earlier plans, leading to major changes.

The southbound roads west of the square will still be incorporated, but not the roads in front of the palace. Instead the five lanes of northbound traffic on the eastern side will be expanded to three going in one direction and four going in the other.

“This is a plan finalized after holding 61 hearings open to the public from September to December 2019, and an additional 100 this year,” the city government said.

The city government said that there was a high level of interest among those who took part in these hearings to see the square turned into a green space where people can sit and rest under the shade of trees.

“The renovation of the square is part of a larger plan to create a 2.6 kilometer [1.6 mile] green pedestrian-friendly walkway from the Gwanghwamun area to Seoul Station,” the city government said. “We hope this will not only provide a green space for the people but also boost business prospects for local stores in the area due to increased foot traffic.”

The plan includes turning Sejong-daero 23-gil, a road that runs east to west south of Sejong Center, into a pedestrian space.

The new plan also abandoned the idea of creating an underground passageway that connects the Gwanghwamun area to the City Hall area, and from there through the Euljiro area toward Dongdaemun.

“A simpler remodeling of the current underground space under the square will take place instead,” the city government said.

The original plan to bring back a terrace from the Joseon Dynasty (1392-1910) that was outside Gwanghwamun Gate of Gyeongbok Palace for kings to hold public rituals, called woldae in Korean, is to be discussed with the cultural heritage authorities.

“We will have to discuss with the Cultural Heritage Administration about whether there may be ways to bring this back without affecting traffic in the area,” the city government said.

The new plan made no mention about moving the statues of King Sejong and Admiral Yi Sun-sin from the square, which had once been part of the city government’s discussions about the new square’s design.