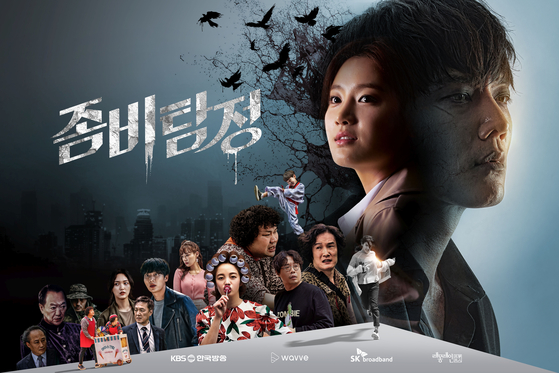 A poster for the new drama series from SK Broadband, ’Zombie Detective,“ which premiered on the Sept. 19 as early access on B tv. [SK BROADBAND]

On the Sept. 19, SK Broadband released the first two episodes of its first original content drama, “Zombie Detective” on B tv as video on demand, or VOD. According to B tv’s weekend audience rating survey for Sept. 19 and 20, Zombie Detective was the second most watched content. Taking into consideration that series, such as foreign seasonal dramas, tend to have smaller audiences that binge-watch all the episodes, making its total viewer number low but its combined watched time high, “Zombie Detective”’s high ratings, which were more than double that of any of B tv’s other new releases on the same weekend, came as a pleasant surprise to channel officials.

“Zombie Detective” is a drama produced by RaemongRaein, jointly-invested in by KBS, SK Broadband, and Wavve. This comedy-drama follows the story of a resurrected zombie (played by Choi Jin-hyuk) who remembers nothing of his past. He works as a detective to regain his memory and solve the cases he is assigned. This season had a total of 12 episodes and will likely continue the story in upcoming seasons.

Apart from its story and presentation, what made the drama extra special was how it was released. “Zombie Detective”’s original airing date was scheduled to be Sept. 21 on KBS, but B tv exclusively released two episodes prior to its television broadcast. This pre-emptive VOD release, which is contrary to the conventional “TV first, rentable/purchasable services later” strategy, proved B tv’s foresight and garnered a sizable number of viewers.

However, calling this early-access strategy of B tv a novel, unprecedented measure would be a far cry from the company’s previous works and ambition. Having already released Ocean, a monthly subscription plan which provides the widest range of movies in the Korean television market, B tv aims to jump in the over-the-top (OTT) service market and set itself as a formidable original content creator. With its previous investments in Korean films, animations, and documentaries, B tv is taking its first step with the launch of “Zombie Detective.”

“For us, ‘Zombie Detective’ is like a new start, as well as a new challenge. We hope this drama can act as a starting point for B tv’s numerous other original content creations,” said an official from SK Broadband.

From Haitian voodoo to ‘K-zombies’ (KOR)

Korean Zombie hints at retirement after loss to Volkanovski