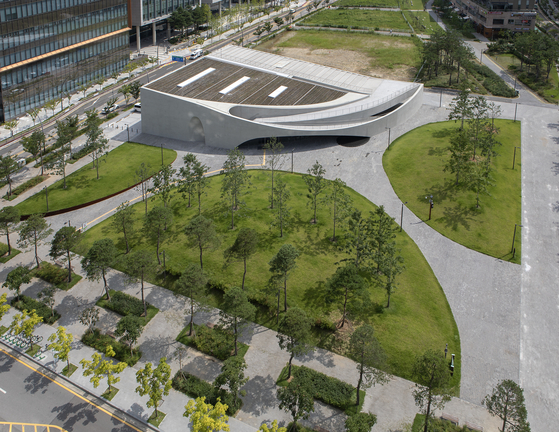 
Magok, located in a far western area of Seoul, 10 minutes from Gimpo International Airport by car, is emerging as a new hot place for arts and culture as well as high-tech industries. A fortnight ago, Kolon Group opened an art museum named Space K Seoul in the area, after the conglomerate relocated the headquarters of its major affiliates to its new building Kolon One & Only Tower in Magok in 2018.

The new museum, designed by Korean architect Cho Minsuk, is a five-minute walk from the Kolon One & Only Tower, designed by American studio Morphosis Architects. The fan-shaped museum building, whose area totals 2,044 square meters, has a sloped roof covered partly with grass and partly with wide steps, which can be used as an auditorium for small-scale concerts and performances.

People can approach the roof space through another staircase directly from the adjacent small park on the ground level. "Cho designed the museum to play the role of not only a cultural space but also a park for the residents and workers in this area," explained Hwang In-sung, a curator of the museum. Cho, founder of the Mass Studies studio, curated the Korean Pavilion exhibition for the 2014 Venice Biennale of Architecture, which won the prestigious Golden Lion award.

Just a seven-minute walk from Space K Seoul stands the Seoul Botanical Park, which was set up in May 2019. In a site adjacent to the botanical garden, a new building will be constructed — one that has been designed by the renowned Japanese architect Tadao Ando to house the LG Arts Center, which will be moved from the current GS Tower in southern Seoul. As one of Seoul's most popular theaters for plays, musicals and multidisciplinary performances, LG Arts Center will reopen in 2022 in an extended form in the new building. The relocation of the theater follows the LG Group's move that opened its research and development complex named LG Science Park in Magok.

Meanwhile, Space K Seoul started its inaugural exhibition "Distorted Portrait" which features about 30 pieces including paintings, sculptures, photography and installations by 21 artists that depict human faces or bodies set in a dark reality. 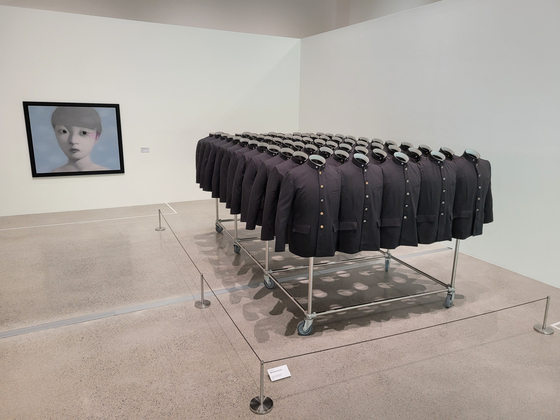 
In a room stands the renowned Korean artist Do Ho Suh's installation work "High School Uni-Form," which is a group of black-colored school uniform pieces linked to each other. The work, based on the artist's memory of his school days when the atmosphere and culture of boys' schools were similar to those of the military, symbolizes the situation that individuals' identities are controlled and unified into that of a group. The work is juxtaposed with the famous Chinese artist Zhang Xiaogang's melancholic portrait painting of a boy, "Amnesia and Memory No.16" that suggests suppressed memories of violent events in modern Chinese history.

In another room hangs a group of photographs by the London-based Korean artist Chan-hyo Bae, in which the artist himself poses in old European clothing as some figures of the bloody Tudor history. He is well known for his elaborate mise-en-scene and portrait photos, in which he restages Western folktales and history to explores Western cultural stereotypes and alienation based on what Bae experienced as an Asian man in Britain. 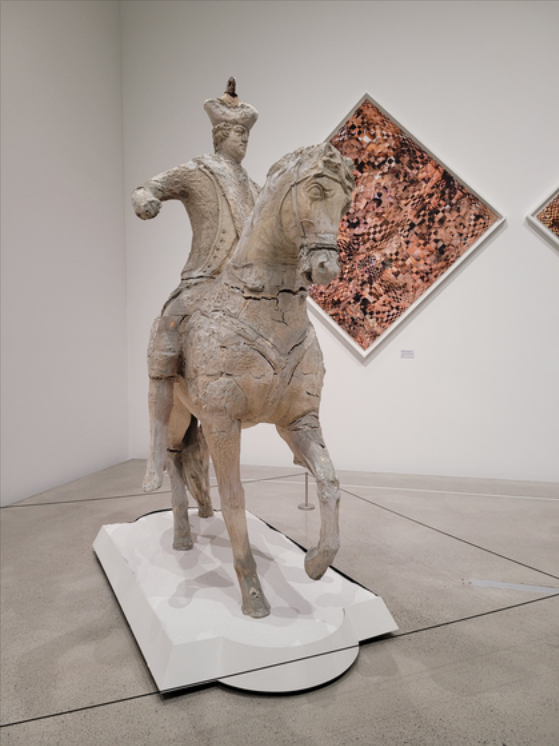 
Another London-based Korean artist Meekyoung Shin's sculpture "Written in Soap: A Plinth Project" is also among the exhibits. A different edition of the sculpture, which is the recreation in soap of the 18th-century British statue of the Duke of Cumberland, was installed in a 2013 public art project on the empty plinth in London where the original statue once stood but was eventually taken down. The soap sculpture eroded over time as the artist intended. Shin is famous for condensing and visualizing the flow of time that artifacts go through though her recreations of antiques and classic monuments in soap.

In another room, German artist André Butzer's grotesque portrait of a man, "Untitled(Wanderer)," faces an even more grotesque sculpture by Pakistani American sculptor Huma Bhabha, "One Thousand." When once asked about her sculptures that often look like combinations of a primitive totem and a mummified human body, the artist said in an interview with ArtReview in March, "I don't want to scare somebody. But life is pretty horrific. It keeps us all horrified." However, it scared at least one person seriously in this Korean exhibition. "A cleaning worker saw the work in the dark on one early morning and she was so scared that she quit the job," said Lee Jang-uk, senior curator of Space K, who planned the exhibition. 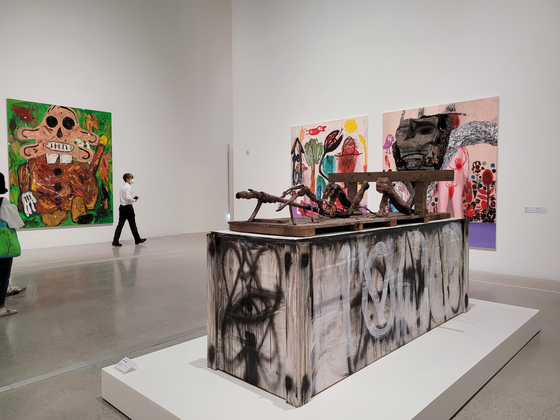 
"Some might say the exhibition is too gloomy to be a museum's inaugural show," he said. "However, I wanted to start with dealing with our reality, which we need to talk about more in this Covid-19 pandemic situation."

"We have donated this museum to the Seoul city government, while taking charge of its operation for the next 20 years," Lee said. "As the older art spaces of Kolon, such as Space K Gwacheon [south of Seoul], have focused on discovering young or undervalued Korean artists and introducing foreign artists less known here, the new museum will also attach importance to such activities, while holding solo shows of some famous foreign artists." The solo exhibitions of American artist Hernan Bas and British artist Ryan Gander are scheduled for next year, he added.

The exhibition "Distorted Portrait" runs through Jan. 29, 2021. It is closed during the Chuseok holidays. Admission is free until the inaugural show wraps up. The museum is located a 12-minute walk away from Magok station, subway line No.5