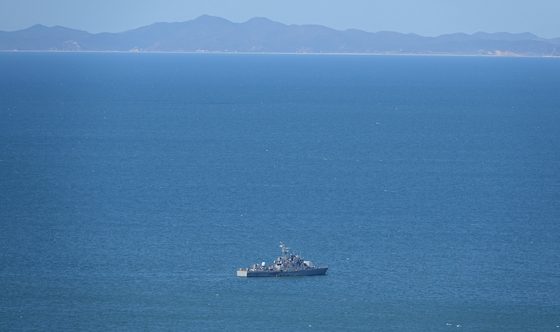 According to a senior ministry official citing military intelligence, a North Korean fishing vessel discovered the official, surnamed Lee, around 3:30 p.m. Tuesday but he somehow evaded capture. The North then mounted search operations for Lee for around two hours.

“Later, the situation changed drastically and limited [Pyongyang’s] response,” the Defense Ministry official said, apparently referring to Lee’s shooting and killing by North Korean troops at around 9:40 p.m. that evening.

Lee, who was a 47-year-old civil servant at an agency under South Korea’s Oceans Ministry, went missing the previous day in waters south of the Northern Limit Line (NLL), the de facto inter-Korean maritime border in the Yellow Sea, in unexplained circumstances.

The Defense Ministry’s description that the North Koreans lost track of Lee somehow and searched for him for hours was backed up by earlier comments from the ruling Democratic Party’s Rep. Min Hong-chul, chair of the National Assembly’s National Defense Committee, on a radio program on Friday.

According to Min, who cited a military briefing, the North Koreans kept Lee under watch for three hours after his discovery Tuesday afternoon, but then lost him. They then searched for him for around two hours, and upon his second discovery, shot him on orders from superiors.

North Korean leader Kim Jong-un issued a rare apology for the shooting on Friday, contained in a message from Pyongyang's United Front Department with its description of what transpired that day.

But the North’s official account contradicted that offered by the South’s military in key details. The South said North Korean soldiers burned Lee’s body, presumably out of fear of coronavirus contagion.

According to the message Friday, North Korean troops, after shooting Lee, burned only the flotsam on which he was riding at the time of his capture.

Even more controversial, however, was the omission of any suggestion that Lee was trying to defect, which the South’s Defense Ministry said last week was the likely explanation for his enigmatic crossing into North Korean waters.

The “unidentified intruder” floating atop some material failed to respond clearly to questions about his identity from North Korean guards approximately 80 meters (260 feet) away, the United Front Department said. The man attempted to flee after two warning shots were fired, prompting soldiers to fire 10 shots at him from 40 to 50 meters away.

North Korean soldiers approached to within about 10 meters of the floating material, but the South Korean was no longer visible on top of the material, the message added.

While the United Front Department explanation suggested its troops shot the South Korean man after judging him to be an intruder rather than a potential defector, Seoul’s military said it had verified the man had expressed his intention to defect to the North Koreans.

That Lee left his shoes behind on a fisheries monitoring he disappeared from last Monday, wore a life vest and used flotsam to travel to North Korean waters also strongly indicated his intent to defect, South Korea’s Defense Ministry said.

To bolster its argument, the Defense Ministry official said Monday the military would hand over relevant intelligence to the Coast Guard after their repeated requests.

Exactly what such intelligence consists of has not been disclosed. At least some of it is believed to include a wiretap of communications between the North Korean guards who supposedly fired on Lee and their superiors, according to hints by ministry officials in earlier briefings.

As to the controversy over the discrepancy of the military’s explanation with the North’s, the Defense Ministry official said the military planned to review all information it had on the incident from the “perspective of a third party,” though no retractions were made of previous assessments.

But the deceased official’s family members — and opposition lawmakers — refuse to accept the idea he was trying to defect.

On his Facebook page Sunday, Lee’s older brother claimed the South Korean military was attempting to frame the official to cover up its own failure to detect Lee’s capture by the North Koreans in time.

No security vacuum from the relocation