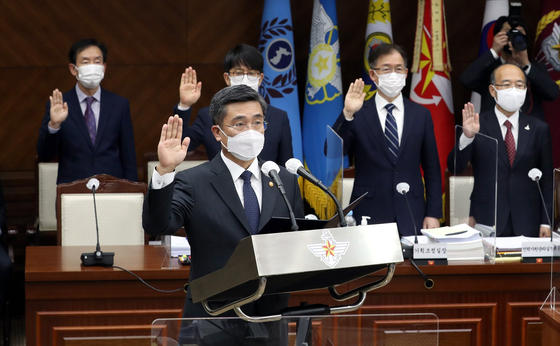 Minister of National Defense Suh Wook takes an oath before a parliamentary audit hearing Wednesday at the ministry headquarters in central Seoul. [NEWS1]

In a parliamentary audit hearing Wednesday, Suh called the North’s actions “clearly wrong,” and reiterated a call to mount a joint investigation with the North to unearth the circumstances behind the shooting.

Controversy continues to rage in Seoul over the vastly disparate accounts of the incident offered by South and North Korea, with opposition figures in Seoul accusing Seoul’s military of inaction when the official was shot by North Korean maritime patrol on Sept. 22.

Expressing condolences to the family members of the deceased official, Suh said the military was looking into the differences between its intelligence and the account presented by Pyongyang in its apology statement relayed to Seoul days after the incident.

One particularly contentious point was the Defense Ministry’s conclusion that the fisheries official had attempted to defect — a claim still being challenged by the victim’s family members, who said there was no evidence he harbored such a desire.

When asked by lawmakers why the ministry changed its assessment of the situation from disappearance to defection on Sept. 22, Suh said the military found evidence suggesting voluntary defection after analyzing intelligence.

As to whether the shooting was a hostile provocation toward the South, Suh’s answer was more nuanced.

“Looking at it comprehensively, we can call it an act of hostility,” the minister said. “But there is room for interpretation.”


On whether it represented a violation of the Sept. 19, 2018 military agreement signed between the two Koreas to stop mutual hostile actions on the border, Suh suggested the matter was not explicitly covered by the military deal, but that it “violates the spirit of the agreement.”


Formally known as the Comprehensive Military Agreement, the deal was signed by military chiefs of the two Koreas at the third inter-Korean summit at Pyongyang. It stipulates that both sides will halt any acts of mutual military hostility, and calls for gradually disarming the heavily fortified DMZ and its neighboring waters.


But as relations faltered between the two Koreas, along with the North’s denuclearization talks with Washington, Pyongyang effectively sidelined the agreement with provocations like missile tests and the demolition of the inter-Korean liaison office in Kaesong in June. It has yet to carry out an explicit act of hostility in the demilitarized zone (DMZ), however.

With the South Korean public’s appetite for inter-Korean exchanges souring over a series of provocative acts by the North, Seoul finds itself in a delicate balancing act to maintain a posture of strength toward Pyongyang while preventing relations from deteriorating further.

That calculus appeared present in the Defense Ministry’s audit report Wednesday, which assessed North Korean leader Kim Jong-un’s apology for the shooting as Pyongyang’s attempt to “manage the situation.”


The North’s decision to issue the apology — an unprecedented act for the normally impenitent regime — showed it was “conscious of public opinion in South Korea about the incident,” the report said.