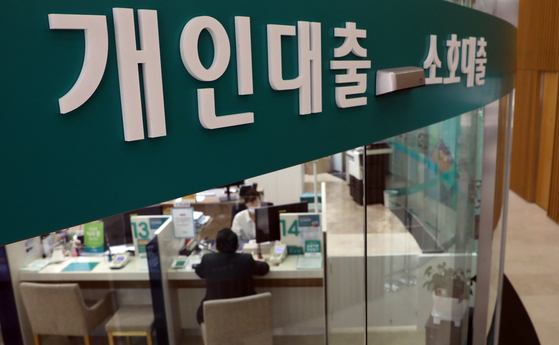 The loan department of a bank in Seoul on Sept. 18. Loans borrowed by young people continue to grow amid sustained increases of housing prices and a bullish rally in the stock market. [YONHAP]


Koreans in their 20s and 30s have taken out a total of 62 trillion won ($53 billion) in so-called minus bankbook loans in the three years of the Moon Jae-in administration, indicating that young people are seeking alternative ways to raise money for real estate and stock investment as traditional bank loans have become more restrictive.

Minus bankbook loans are a short-term debt offset against an existing parent account, operating similarly to a prearranged overdraft.


According to the office of the main opposition People Power Party (PPP) lawmaker Kim Sang-hoon, based on data provided by the Financial Supervisory Service (FSS), 1.23 million minus bankbook loans were opened by people in their 20s and 30s at five commercial banks between 2017 and July 2019. That accounts for 36.5 percent of the 3.37 million minus bankbook loans created overall during the same period.

The lawmaker’s office particularly noted the sharp rise of such loans among people in their 20s.

The maximum amount that could be withdrawn from minus bankbook accounts has risen from 2.26 trillion won in 2017 to 2.63 trillion won as of 2019.

Overdue payments by those in their 20s have also significantly increased.

Overdue payments of minus bankbook loans by those in their 20s in 2017 amounted to 1.27 billion won. By the end of 2019, that figure had risen to 1.69 billion won. As of the first seven months of this year, 1.3 billion won is still owed.

“Amid the loan restrictions applied under the Moon Jae-in government, young people have been aggressively seeking out loans as housing prices continue to rise while they also struggle from jobs,” said lawmaker Kim. “They are also borrowing loans to invest in the stock market.”

Kim said the younger generation will undoubtedly face a larger debt burden, especially compared to older age groups as they have relatively smaller assets and income if the current sluggish economy continues.

Regret sets in as individual investors add up their losses

Nowhere else to turn