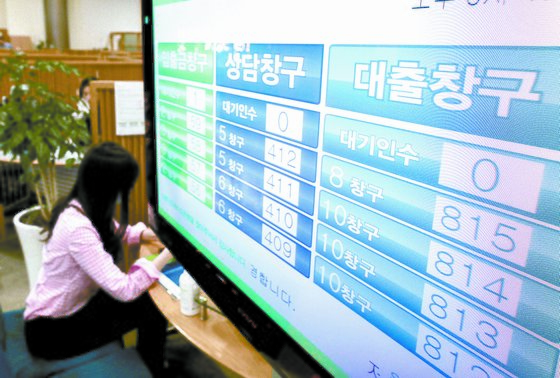 A visitor is inquiring about a loan product at a bank in Seoul. [NEWS1]


Unsecured lending — which involves the extending of credit to borrowers not pledging collateral — is increasing fast.

According to five major commercial banks — KB Kookmin, Shinhan, Woori, Hana and NH Nonghyup — outstanding loans issued to individuals came to 120.2 trillion won ($100.7 billion) as of the end of July, up 2.7 trillion won, or 2.28 percent, from a month earlier.

In March, those loans increased by 2.2 trillion won compared to a month before and stood at 113.1 trillion. In June, the amount was 117.5 trillion won, up 2.8 trillion won. That was the fastest increase in any June on record.

Some analysts speculate the rise is the result of Koreans panic buying properties in response the government's war on property, which has involved a raft of anti-speculation measures. With jeonse (long-term housing rental deposit) and mortgage requirements tightened, unsecured borrowing is one avenue left for some individuals seeking to buy a property.

Unsecured loans are backed by the person rather than an asset and can generally be used for anything, from groceries to home purchases.

While the demand for unsecured loans increased, the issuing of mortgages fell.

Mortgages issued to individuals stood at 452.8 trillion won last month, up by 1.37 trillion on month. In May, the increase was 1.8 trillion won.

“The Moon administration must be aware that [their policies and measures] are the main cause of the recent surge in unsecured loans,” said United Future Party Rep. Kim Sang-hoon.

Analysts also say that aside from properties and investments, some Koreans are using unsecured loans to get by during these times of difficulty.