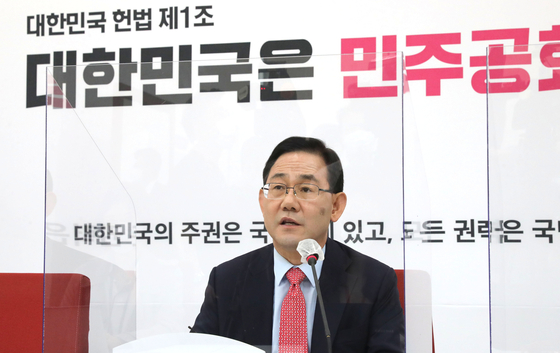 The fact that the South Korean “military’s intelligence content is once again being reported on [in the media] without discretion is deeply regrettable,” Moon added.

According to another military official, who said the claims made by Joo, other lawmakers and media outlets on the issue were fattened with “speculative notions,” the military is considering taking legal action against the leakers for violating a law on military secrets.

Joo is the floor leader of the main opposition People Power Party (PPP). During a press conference on Monday, he cited “special military intelligence” to bolster his claim that a North Korean commanding officer had ordered a subordinate to shoot and kill the South Korean official, surnamed Lee, not long after Lee was discovered in the North’s waters on Sept. 22.

The lawmaker went on to slam South Korea’s presidential office, the Blue House, for what he said was an attempt to “fabricate and distort” intelligence to cover up the military’s failure to act on its knowledge of what was happening to the official.

While Joo did not reveal the exact source of such information, he hinted the intelligence emerged from the Defense Ministry and the National Intelligence Service. Another PPP lawmaker, Rep. Han Ki-ho, later told a local outlet that the intelligence on the “762” order was obtained through the South Korean military’s wiretap on North Korean communications.

The comments appeared to corroborate several reports last week that South Korea was listening in on the conversation between the North Korean patrol boat that had captured the man, and a superior officer on the other side of the line.

According to Yonhap News Agency, which reported some details of the conversation, the North Korean captain of the boat tried to verify the order a second time after it was relayed, asking “Shoot and kill? Is this real?”

The tapped communication also revealed North Korean soldiers initially intended to rescue Lee, who had expressed a desire to defect to the North, according to the reports.

The Defense Ministry and Blue House on Thursday denied that words like “shooting” or “killing” appeared in the intelligence they had collected, but declined to confirm whether such information was gathered through wiretapping.

According to Deputy Spokesperson Moon on Monday, the South Korean military’s conclusion on the matter was arrived at not in real time, but “through the assembly of [several] limited pieces of intelligence” and a post-incident analysis.

False or misleading information propagated through the words of a sitting lawmaker also could erode the public’s confidence in the military, an official added.

As to uncovering the truth of what transpired that day, Seoul has proposed mounting a joint investigation with Pyongyang into the incident — an offer that may play into hopes that communications be restored between the two countries.

No reply has yet come from North Korea, which, despite apologizing for the “unfortunate” killing, claimed its soldiers were only following routine security guidelines.