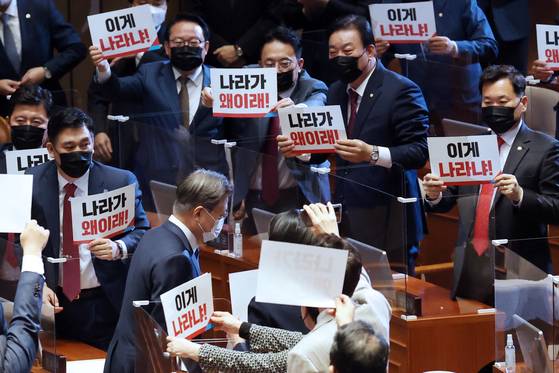 As President Moon Jae-in leaves the main hall of the National Assembly after delivering the 2021 budget speech, lawmakers of the opposition People Power Party show him protesting signs, asking "What happened to this country?" on Wednesday. [YONHAP]


President Moon Jae-in on Wednesday faced outraged lawmakers from the main opposition party during his budget speech at the National Assembly, who fiercely objected to the Presidential Security Service frisking their floor leader.

Moon arrived at the National Assembly around 9:40 a.m. to deliver the 2021 budget speech. Before addressing the lawmakers, he headed to the National Assembly speaker’s office for tea with the leaders of the legislative, administrative and judicial branches, but the representatives from the largest opposition People Power Party (PPP) boycotted the event.

Rep. Joo Ho-young, floor leader of the PPP, had originally planned to attend the meeting and headed to the venue, but left in protest after agents from the Presidential Security Service body-searched him.

According to the sources in the National Assembly, Joo was the only participant of the meeting who was frisked. Other participants included the chairman and floor leader of the ruling Democratic Party (DP), neither of whom were subjected to a body search.

“I was stopped by security guards in front of the venue,” Joo told PPP lawmakers later in the day. “I identified myself as the floor leader of the PPP, but they forcibly body-searched me.”

Joo said one of the guards asked him what he was carrying inside his jacket. “I said I only have a mobile phone, and they immediately frisked my body,” he said. “I asked if there was a precedent of body-searching the floor leader of an opposition party, and they said there was.”

Joo said he was humiliated by the treatment.

A senior official with the Presidential Security Service later apologized to Joo that the guard had made a mistake, but Joo said he thinks it was intentional.

“I was going to confront the president to answer the 10 questions I had publicly asked in July,” he said. “I will see if it was really a mistake or intended to stop my meeting with the president.”

“The president said he promotes the politics of cooperation, but committed a discourtesy to our leader,” said Rep. Bae Hyun-jin, spokeswoman of the PPP. “We demand the Blue House’s official apology and explanation.”

“Frisking the floor leader of the opposition party inside the National Assembly is a blunt insult to the legislature,” the party said in an official statement.

“I once served as the secretary general of the National Assembly, so I know the protocols,” PPP Rep. Chung Jin-suk said. “When the president visits the National Assembly, the speaker and the leaders of the parties have teatime, but there was no precedent that the participants were frisked. Even during the junta of Chun Doo Hwan, the presidential office didn’t body search the politicians. There must have been a hidden intention.”

Later in the day, National Assembly Speaker Park Byeong-seug offered an apology to Joo. “Although the Presidential Security Service was responsible, the speaker told me he is sorry for the incident because it happened inside the National Assembly,” Joo said.

According to Joo, Park also confirmed that other participants of the meeting were not frisked and requested the presidential chief of staff to investigate the incident.

Kim Chong-in, acting head of the PPP, was also a no-show. He said he decided to not attend because the administration and the ruling party are ignoring the party’s request to conduct independent counsel probes into the financial fraud and illegal lobbying scandals surrounding a pair of high-profile hedge funds.

It was Moon’s fifth budget speech at the National Assembly since he took office in 2017. He has presented a budget speech annually and delivered an address for a supplementary budget in 2017.

Following the controversial teatime, Moon entered the main hall to deliver the 2021 budget speech. The government proposed a record 555.8-trillion-won ($469.8 billion) budget for 2021, 8.5 percent higher than this year’s budget.

As Moon entered the main hall at 10 a.m. to start the live-air speech, the PPP lawmakers loudly complained about the Blue House’s treatment of their floor leader. As their protest continued, Speaker Park said what happened to Joo is regretful but that the opposition also needed to calm down.

Moon started his address at 10:02 a.m. During his 35-minute speech, the DP lawmakers enthusiastically responded, sending 25 rounds of applaud.

The PPP’s 103 lawmakers held signs, which said “What happened to this country?” in protest, while jeering at Moon throughout the speech.

Later in the day, the Presidential Security Service released a statement maintaining that it had followed protocol.

“A political party’s floor leader is not exempted from frisking,” it said.

The Presidential Security Service said an exemption is sometimes given to a floor leader when he or she accompanies the party chairman, but Joo came to the event alone.

However, the statement added, “The head of the Presidential Security Service wished that the agent would have been more flexible."