Rallies in the coronavirus era

Rallies in the coronavirus era 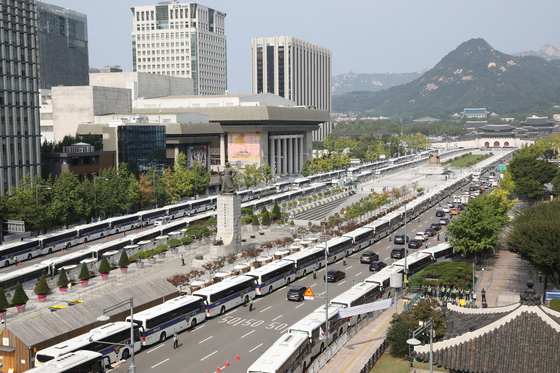 Hundreds of buses are positioned to block rallies on Gwanghwamun Square on Oct. 3. [YONHAP]


Finally, car walls appeared at the rally on Oct. 3 on the National Foundation Day. The blockade with cars around Gwanghwamun Square provoked online debates. The criticism that “the Jae-in Fortress appeared after the Myung-bak Fortress” was countered by the argument that “Car walls are the last fortification to defend the safety of the citizens.”

The car walls on National Foundation Day were excessive. The Myung-bak Fortress, named after former President Lee Myung-bak, went through east to west at the time of the candlelight protests against U.S. beef in 2008, but the Jae-in Fortress in 2020 covered all directions.

Aside from the car walls, the police set up 90 checkpoints, and 21 guarding police units and 800 traffic and local police forces were on standby at the scene. The car walls built by the government that came into power with candlelight protests will be recorded as political noise in the midst of the Covid-19 outbreak,

Agora democracy is in crisis. Starting in Athens and continuing for thousands of years, agora democracy is helplessly faced with the virus that started the end of last year. Disease control has become a free pass to undermine basic rights. The surveillance used to find Covid-19 cases by reverse-tracing mobile records has penetrated into our daily lives.

Concerned voices are not overwhelmed by the majority. In fact, Korea’s successful disease control, one that the government takes pride in, is an outcome achieved by giving up basic rights. People like to reiterate top singer Na Hun-a, who said, “What defended the country was you.”

Warnings about collectivism rising with the spread of Covid-19 constantly continue. Yuval Harari, the bestselling author of “Sapiens”, wrote in a contributed article on the Financial Times in March titled “The world after coronavirus.” In this time of crisis, we face two particularly important choices, he said. The first is between totalitarian surveillance and citizen empowerment. The second is between nationalist isolation and global solidarity.

The Brookings Institute, a liberal American think tank, argued in a report titled “Democracy after coronavirus” that if people’s participation is not guaranteed, the path to a new democracy after the pandemic cannot be found, and the rise of nationalism and populism should be watched.

Where are rallies in the age of coronavirus headed? A little hint can be found from Socrates, who stood at an agora in Athens 2,400 years ago. He said that everyone has the ability to enjoy personal freedoms, regardless of their background.

All up to Moon