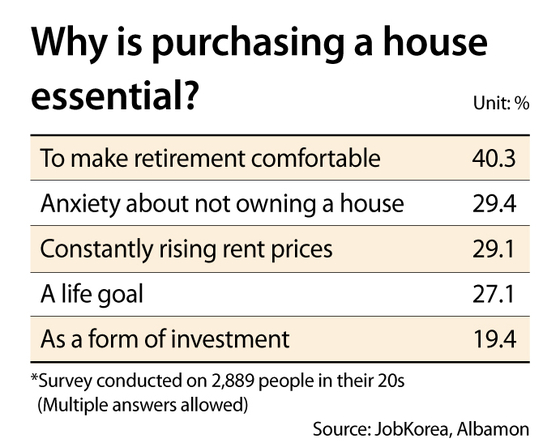 More than nine out of 10 people in their 20s think purchasing a house is essential, according to a joint survey by job portals JobKorea and Albamon.

The result comes after the two job portals conducted a survey on 2,889 people in their 20s who don’t currently own a house.

When they were asked if they think purchasing a house is necessary, 94.8 percent said it is “essential.” Of them, roughly 78.1 percent said they have plans to buy a house even if they have to take out loans.

Other reasons included that owning a house is a life goal, chosen by 27.1 percent, and investment, at 19.4 percent. Multiple answers were allowed.

The result differed depending on where respondents currently live.

About 72.3 percent of respondents who currently live in Incheon and Gyeonggi also said they would like to purchase a house in the greater Seoul area. Only 23.5 percent said they wish to reside in Seoul.

Forty percent of people who live in rural areas said they would like to purchase a house there.

Of the people who said buying a house is unnecessary, 59.1 percent said the sky-high real estate prices would lead them to “fall into debt,” while 27.5 percent said they would like to invest the money in different areas rather than real estate.

Twenty-six percent said they don’t feel the need to own a house, 17.4 percent showed interest in other various types of residences such as “share houses” and 11.4 percent said not owning a house is a better option as they won't have to pay additional costs such as taxes.

Over three-quarters, or 78.3 percent, of respondents said real estate prices will continuously rise in the future while 14.1 percent said prices will stay the same. Only 7.6 percent thought that prices would fall.