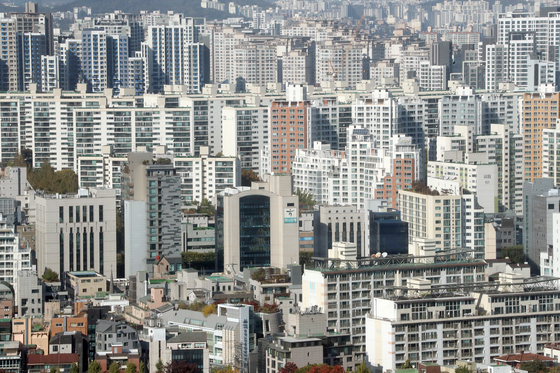 A view of apartments in Seocho District, southern Seoul, on Oct. 23. [YONHAP]

According to analysis by Korea Appraisal Board on Monday, of all apartments in Seoul’s 25 districts, only 54.19 percent were priced 900 million won or below last month, down from 69.26 percent a year earlier.

The situation was most evident in Gwangjin District and Seongdong District, both in eastern Seoul, and Songpa District in southern Seoul.

In the Mapo District, western Seoul, 24.65 percent of the apartments were under 900 million won last month from 54.58 percent the same month last year. In Seongdong District, that figure went from 53.58 percent to 25.05 percent.

A 84.81-square-meter apartment in Lotte Castle Gold Park 1 Danji in Geumcheon District, which was about 875 million won last year, jumped to 1.15 billion won as of September this year.

The situation is also spreading to Gyeonggi and Incheon. In September last year, of all apartments in the Seoul metropolitan area, 88.52 percent cost 900 million won or under. The number decreased to 82.22 percent last month, a 7-percentage-point drop.